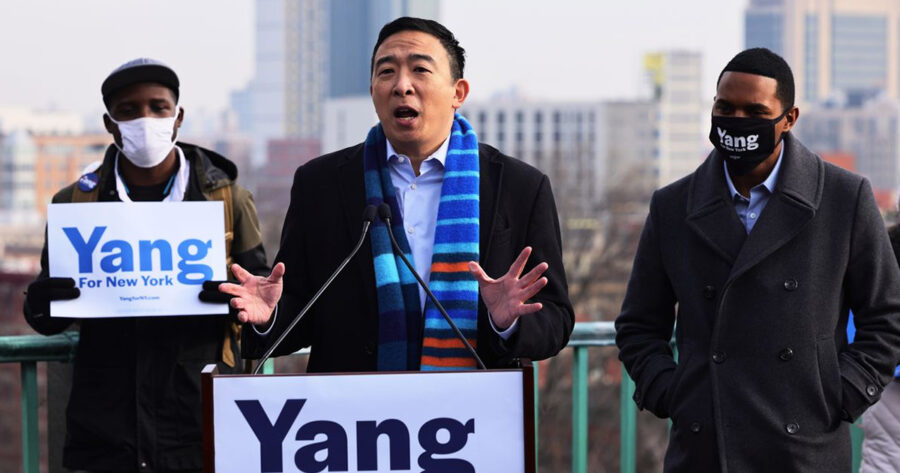 NEW YORK — New York City mayoral candidate Andrew Yang announced today that, if elected, he will list the city to be sold as an NFT online, hoping to raise funds for the New York Police Department.

“Our city desperately needs more police funding so that officers can more effectively crack down on sidewalk chalk art in underserved neighborhoods,” Yang explained. “The NFT market is a really cool way to generate more money for the city, by letting some rich benefactor own the ‘original’ version of the city — or the Big Apple, as we New Yorkers call it — as a collector’s item. I think there’s a really good chance that someone like Jeff Bezos, Elon Musk, or even Israel could purchase the NYC NFT for a few billion dollars.”

Yang’s supporters were quick to praise the mayoral candidate online.

“I’ve never even been to New York, but I wish I lived there so I could vote for Yang,” said Twitter user MrMathMan1776Nerd. “Our country really needs more people who think outside of the box. That’s Andrew Yang. If someone else has ever even thought of an idea, Yang throws it out! He only wants to have the freshest, newest ideas — and that’s what makes him so perfect. You criticize Yang all you want for not having the best ideas, but you can never say he doesn’t have the newest ideas.”

“There’s a reason Yang is leading all the polls and it’s because he’s an actual genius,” said Redditor PM_ME_NASTY_FEET. “I have absolutely no idea what an NFT even is, and that’s what makes this idea so perfect. I just want whoever is the smartest person running to win every election. Honestly, instead of an election, they should just have all the candidates do an IQ test and just nominate whoever wins that. Hell, I’m gonna post that to r/showerthoughts.

Despite support, however, there were also many who criticized Yang.

“Even if I wanted to raise NYPD funding (I don’t) and even if I didn’t care about the environment (I do), this is just obviously a bad idea because anyone who buys NYC as an NFT knows that it’s only contributing to the very climate change that will soon leave the city underwater,” said Twitter user SocialismIdeasForYou. “It’s a terrible investment for potential buyers!”

At press time, Yang was rushed to a local hospital after attempting to beat Joey Chestnut’s hot dog eating contest record in an apparent bid to prove his New York credibility.