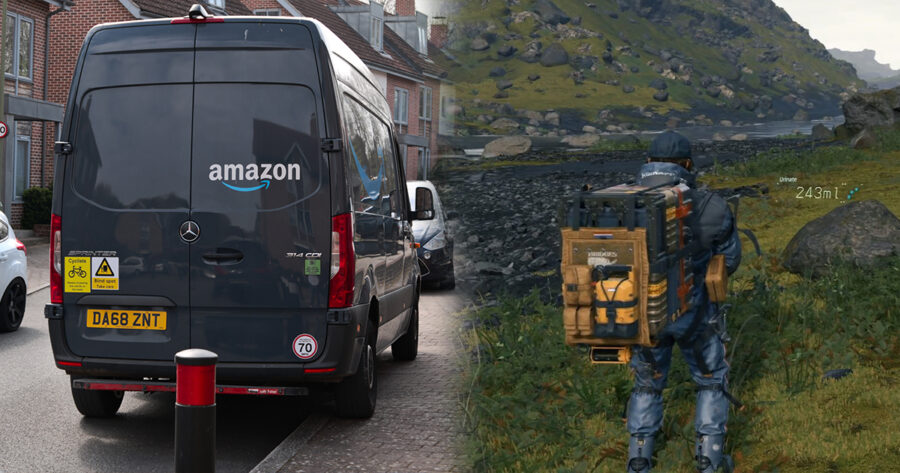 AKRON, Ohio — A local Amazon delivery driver reportedly became enraptured playing the deluxe re-release of Death Stranding after discovering that the game fulfilled his long-time escapist fantasy of being able to pee wherever and whenever he wants.

“Death Stranding’s delivery worker apocalypse is pretty much a direct analog for my day-to-day experience, except for the unlimited bathroom breaks,” said Vincent DiMarco, 28, weeping with glee just recalling the forgotten feeling of freedom the game had provided him. “That part makes it a beautiful fantasy world that I want to spend endless hours in. I even put on my headphones to hear my stream in full 3D, which really adds to the immersion.”

DiMarco’s fondness for Death Stranding’s urination feature only grew when he realized that part of the game’s asynchronous multiplayer meant that mushrooms would grow for other players wherever he left his mark.

“You mean to tell me that other people who play this are able to see evidence of my urination, and it’s something beautiful that people want to contribute to? That’s absolutely incredible. Working at Amazon, you are trained to become so ashamed of all of the waste that your body produces and to hide it from everyone at all costs. Meanwhile, Sam Porter Bridges uses his shit and sweat to kill ghosts and people cheer when he has to go. Hideo Kojima is a genius.”

However, DiMarco notes that one downside of connecting with Death Stranding is that it’s made him notice how lonely his real-world drives are compared to the companionship offered by the game’s iconic Bridge Baby character.

“I started strapping my Amazon truck piss jugs to my chest because I was curious what carrying the baby felt like,” DiMarco said, “But when I showed up at people’s houses they would usually give me funny looks, hold their noses, or recoil in horror. It’s amazing how pompous people with Flush Privilege can be.”

At press time, DiMarco was trying not to think too much while driving about his second favorite feature in the game which involves letting your exhausted protagonist go to bed.