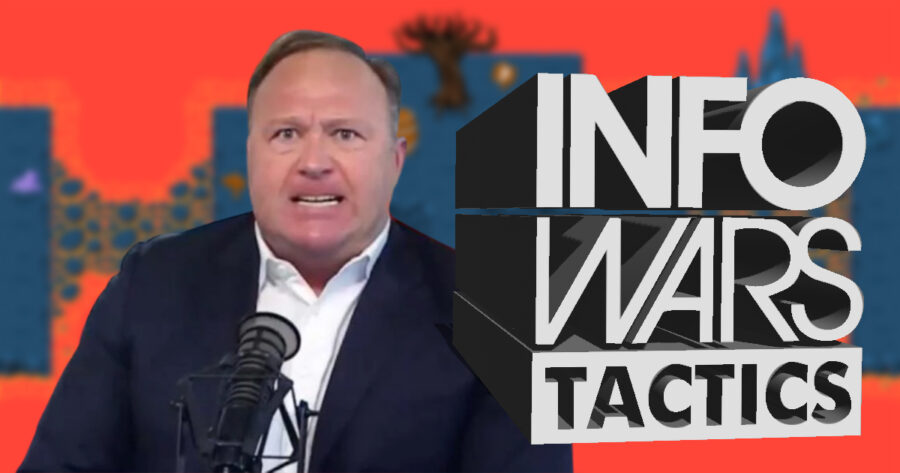 DALLAS, Texas — Claiming that the new game would revolutionize the long running InfoWars franchise, far-right radio host and conspiracy theorist Alex Jones unveiled a trailer and early details for a new tactics game set in the InfoWars universe in a surprise stream on the InfoWars website Tuesday morning.

“InfoWars Tactics is a turn-based tactical RPG that takes place 10 years before the first episode of InfoWars, placing you in control of a DMT-enhanced supersoldier on the front lines of the war for your mind,” said Jones, standing on a soundstage in front of a large LCD screen displaying pulsating graphics of the game’s placeholder logo. “You’ll need to filtrate your own water, collect Gorilla Mind pills and dodge gay bombs to rise to the top of the InfoWars Army and reveal the secrets of the Machine Elves and the Fifth Dimension.”

Jones added that in addition to a robust story mode, InfoWars Tactics will include various optional quest lines and hundreds of collectible false flags and non-player crisis actors to interact with throughout the game’s world.

“Just like in the real world — if you can even call our world ‘real’ — you won’t be able to see the game’s true ending unless you uncover every single false flag that the government has placed to deceive you,” Jones said. “Will the game’s true ending contain new information about the origins of Pizzagate and Seth Rich? That’s something you’ll only be able to find out when InfoWars Tactics launches this holiday season.”

At the conclusion of the presentation, Jones announced that Infowars Tactics would be released exclusively on the InfoWars website after he’d been deplatformed from Steam and the Epic Games Store.