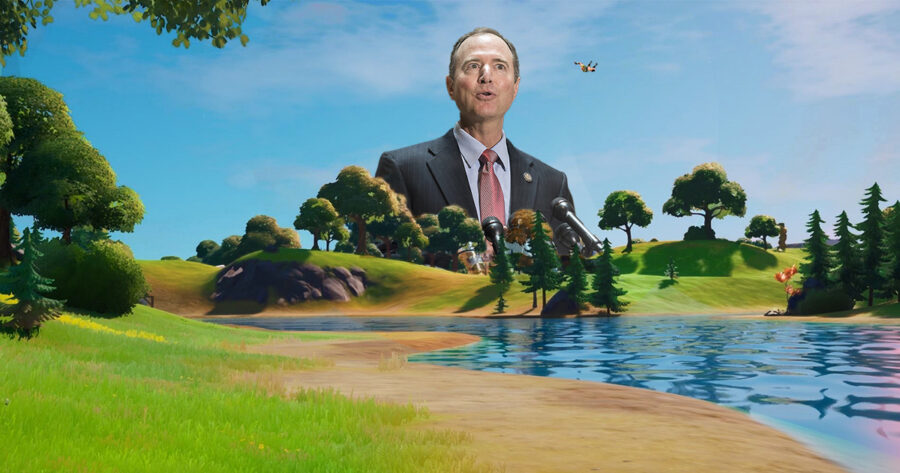 WASHINGTON — In an effort to educate younger Americans about the still-developing allegations surrounding President Trump’s role in the insurrection on the U.S. capitol, a 50-foot-tall avatar of Democratic House select committee member Adam Schiff announced a summary of the committee’s most recent findings and still-open investigations to an audience of millions of gamers in Fortnite yesterday.

“The unanswered questions surrounding this President are a constant threat to our national safety,” said the congressman from California in a loud, booming voice which simultaneously lifted all of the Fortnite players not already eliminated from the ongoing round five feet into the air while projections of partially-redacted White House security memos pulsated in the game’s background. “Our work here is not over by a long shot, and President Trump will have nowhere left to run as the eye of the storm narrows on his legacy.”

Players online during the interactive political speech event say they found it interesting, even though some of the long-running lore required to understand the event went over their heads.

“I don’t recognize the names of a lot of the villain characters he kept talking about, but maybe it’s because I only started playing during the end of chapter two,” said one player, Billy Alvarado, 13. “He was going on for a while about the D.C. Metropolitan something-or-other, I figured that was some new faction from the early seasons so I kind of tuned out for a while to gather some ammo. This guy seems important and smart, but I’m trying to get a Victory Royale here and I can’t get distracted. I hope someone uploads the highlights to YouTube so I can rewatch later.”

Representatives from Fortnite publisher Epic Games say they hope the game can continue to become a public square of thought for pressing matters like these.

“Marshmallow, Travis Scott, Weezer, Star Wars, the Democrats, we’ll scan anybody into this game if they pay us enough money and get people to play Fortnite for a few moments longer than they normally do,” said Epic PR representative Maura Pace. “We hope Mr. Schiff and his team are pleased with the results of this partnership, and we would like to invite any other U.S. politicians with a message to share with our impressionable fanbase to reach out and see what we can do together!”

At press time, Mr. Schiff was reportedly concerned that the event did not have the impact he’d been hoping for after sales of a promotional tie-in Adam Schiff Fortnite skin failed to break triple digits.