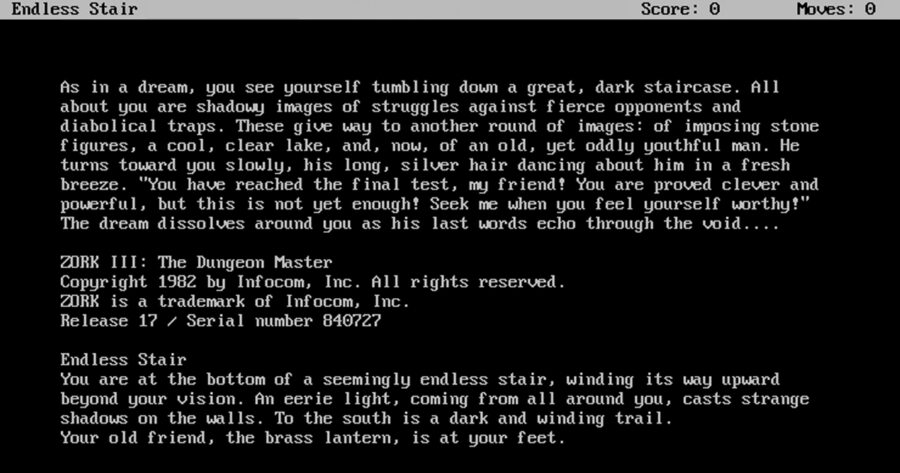 CAMBRIDGE, Mass. — The classic text adventure Zork has been updated for a new generation, with totally overhauled whimsy to stimulate player imagination.

“It’s kinda hard to describe the improvements they made,” said one Zork fan. “What it reminds me of is the first time you hold your child, and you realize that you have never felt so much unconditional love in your life, and through that love, anything is possible. Yeah, I’d say it’s a lot like that.”

The developers of Zork Remaster, Flathead Interactive, have preserved the authentic text adventure gameplay by not adding any graphics, music or a map. Months of development crunch were instead dedicated to enhancing childlike wonder per second and benchmarking wanderlust generation. Longtime fans can also now choose from three different fonts, and use up to 30 new adverbs that will not be spoiled here.

“I’d like to say all this was my idea, but what got me turned onto this project was a mysterious voice that no one else in my family could hear,” said Flathead Interactive founder Bruce Anderson when asked what motivated the remaster. “It sounded so soft, and so real. The voice told me that Zork had a lot of brand appeal online, and read to me a design document as I laid awake in bed.”

Anderson then turned from reporters interviewing him, nodding as if he were listening to someone, and said, “You’re right, I never give myself enough credit.”

Zork Remaster has proven to be a smash hit amongst gamers, selling millions of copies within the first week and maintaining the highest number of concurrent players on Steam. Reviews have also been universally positive.

“The immersion doesn’t end with the game, if you can call it a game,” says Richard Woods of IGN. “I see visions of the Great Underground Empire when I sleep, or perhaps that’s me finally awakening to my true form? I can see it all, the little white house, the glow of my sword when danger is nearby, the hordes of treasure just waiting to be taken. Everyday, the constraints of my job and home feel more like the fiction, a constraint placed on me that I need only to burst free from.”

To celebrate the successful launch, Zork Remaster will be completely free to download all of next week. “We want as many people as possible to experience the magic,” Anderson said. “We wouldn’t want anyone left behind.”