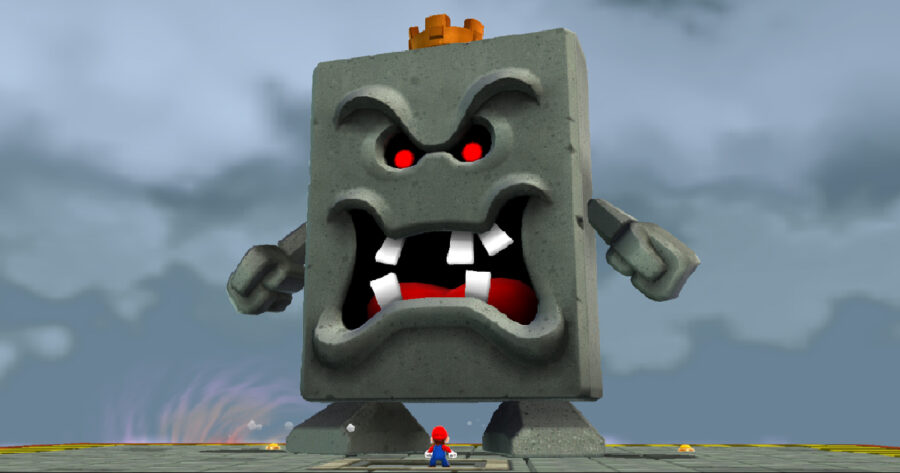 MUSHROOM KINGDOM — A guard in Bowser’s army was forced to show up for his shift even though he had suffered a massive injury to his back, sources say.

Whomp, the guard in question, said that he’d developed a massive bone fracture on his spine after a slip and fall in his home. When he asked his manager for the day off, he was told that sick day requests require 24 hours notice, so it would count as an unexcused absence and he would be penalized and possibly fired.

“I didn’t have any alternatives,” Whomp said. “I can’t afford to lose this gig, so I got my roommate to put two big Band-Aids on my back and went in. I don’t know if that actually helped, but I figured it’s better than nothing.”

As Whomp sustained his injury while off-duty, he doesn’t believe he will qualify for workers compensation. Since he is only scheduled to work 35 hours a week, he doesn’t receive paid time off or health benefits. Whomp expressed concern that if his injury got worse, he would be unable to perform the basic duties of his job, which include walking on patrols and smashing intruders with his face/body by falling onto the floor really hard.

Whomp’s manager, Whomp King (no relation), came under fire for his decision, but defended his actions by claiming he was just following company policy. “This job is at-will employment and I hold all the guards to the same standard which is clearly laid out in the standard-issue employee handbook,” said Whomp King.

“Hell, I even went through the same thing years ago when I was a guard,” Whomp King continued. “Cracked my back, didn’t have the time or money to get it fixed, but I toughed it out. Now thanks to my hard work, I’m a supervisor and I can afford to manage the excruciating pain it causes me every day.”

Another worker for Bowser’s army, Chuckya, said that Whomp’s situation is common. “A lot of my coworkers mess up their bodies working here. I have tendinitis myself because my job involves throwing stuff a lot,” Chuckya said. “I can’t believe my boss expects me to do a job that involves throwing fat Italian guys around all day but won’t give me health insurance.”

When asked what his takeaway from all this was, Whomp said, “I think situations like mine show that us guards need to demand better treatment from Bowser. Our lives are worth more than this, even if technically you’d only get five coins for defeating me.”