What ‘The Eternals’ Post-Credits Scene Means for Me, Someone Who Really Has to Pee 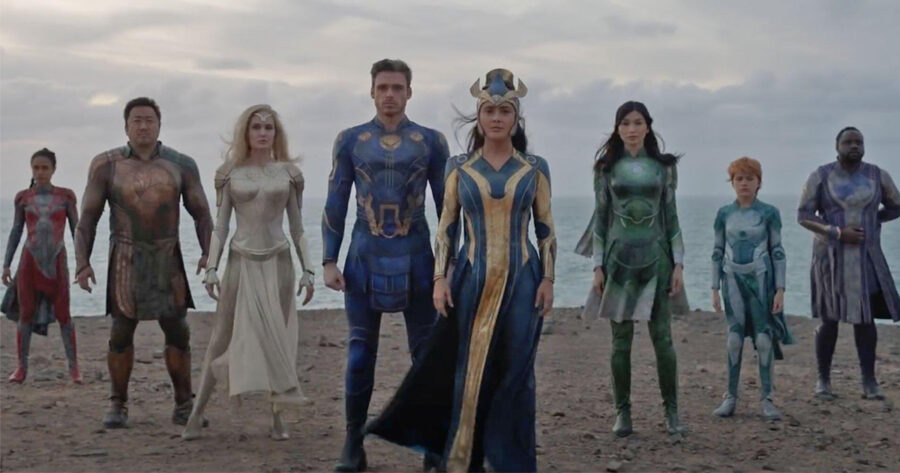 By now, Marvel fans are accustomed to sticking around long after the credits roll, as any seasoned MCU-head knows the story doesn’t end when the screen goes black. With Chloé Zhao’ fresh, lore-heavy The Eternals hitting theaters this weekend, we took a look at what the almost three-hour film’s post-credits scene means for me, someone who really, really has to pee.

As usual, the film provides a few of the larger credits before the mid-credits cutaway. We see the producers, the main cast, and the restroom sign peeking out from the slightly opened theater door. Still, I know what I signed up for, and will be sticking my ground, even if I did sneak in a two-liter Fresca in my sneaker. Maybe I could pee in that? No, stay strong.

Here we go: the beloved mid-credits scene. Hopefully it isn’t one of those ones that starts with a slow tracking shot of some unidentifiable location before revealing, after like two whole minutes, a new character who says one word. Please, just let it be a fast one. Oh, wait, I was so distracted by the pee, that I missed the scene. Whoops. It was probably funny.

Still, every Marvel fan knows that the mid-credits scene is just the beginning.

What could be the meaning behind the mystical final post-credits sequence? Will an exciting new character be introduced? Are the stakes for the next entry higher than ever? All we can say for sure is that I’m making horrid noises, and the people around me are concerned. The friends I came with are telling me to just go pee, but no. As I coil into the fetal position, the craft services names scroll, and it’s almost time.

The final post-credits scene begins and I can’t look at it, cause I’m pretty sure if I open my eyes, pee will come out. Still, it sounded thrilling.

As I muster the energy to stand, the lights haven’t come up. Could it be that there’s… a third post-credits scene? This would be unprecedented, utterly thrilling, and would definitely kill me. The Eternals is truly a new kind of Marvel movie – an idea about to be solidified by a surprising, buzzworthy, and- oh, no, the lights just came up.

A huge congratulations to another thrilling entry in the MCU, and a gentle RIP to this Fresca bottle. I… I couldn’t make it down the hallway.