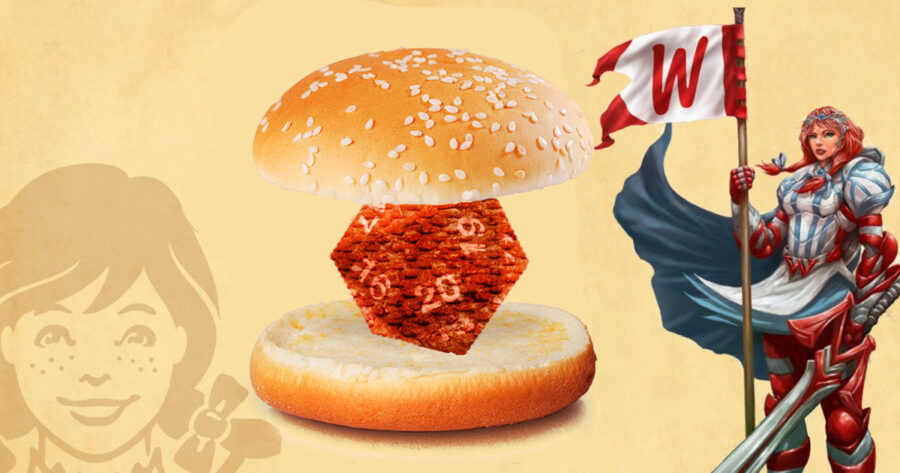 DUBLIN, Ohio – In a press conference today, Wendy’s announced a new twenty-sided bacon cheeseburger which will be released later this month to tie in to the restaurant’s new tabletop roleplaying game.

“When we announced that Wendy’s would be making its first foray into fantasy roleplaying, many people scoffed, or wrote it off as a joke,” CEO Todd A. Penegor told reporters gathered at the company’s headquarters. “All of those people would fail an intelligence test on our fresh, never frozen die, because they’re looking pretty stupid right about now.”

The company said in a written statement the so-called Dice of Baconator will also be available with four, six, eight, and ten sides. A twelve side version was considered but ultimately scrapped for having no discernable use. In addition to the die, the company is coming out with a line of products to be used with the new game.

“No campaign would be complete without the Spicy Chicken DM screen, the sour cream and chive baked graph paper, or the congealed chili miniatures,” Penegor. “It’s our commitment to offering a comprehensive and fresh gaming experience that is also indulgent and smothered in classic Wendy’s menu items.”

Critics are hailing the move as obvious given the entire fast food industry’s turn toward shameless PR grabs which make practically no sense.

“It’s a no-brainer, really,” longtime quick service dining analyst Arthur Cho said in an interview Friday. “Me and the guys back at the office have a pool going to see which chain tries to ironically murder someone first. We’re all very happy to see companies stopping short of that.”

The Dice of Baconator is available at all Wendy’s locations while supplies last. Many in the tabletop community are dubbing it a must have collector’s item for tabletop enthusiasts and anyone who likes owning dice that rot.