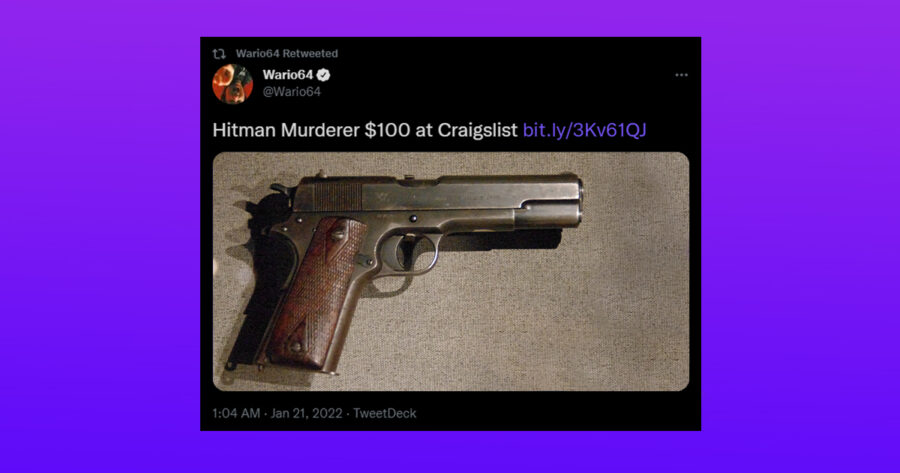 SAN FRANCISCO — Popular video game deal aggregator Twitter account Wario64 has linked to their most disturbing sale yet: a posting on craigslist for a reasonably priced assassin for hire.

“Pretty good deal on a real-life killer,” said the tweet posted early this morning, which was accompanied by a link and a hashtag that reminded followers that it was a paid advertisement.

A click of the link reveals a barely intelligible diatribe from someone that appears to be violently unwell, and among the unformatted ramblings found on the page, a few statements like ‘giv me 100$$$nd ill wack “”NE1””’ seem to indicate that this a person trying to find work as a killer for hire, seemingly charging just $100 to do so.

The video game community was shocked at the latest expansion of Wario 64’s purview.

“Wow, I can’t believe it’s come to this,” said one Twitter user that’s followed the account for years. “I went from finding good deals on indie games to scoring hard-to-find consoles to finding out when and where affordable COVID testing was available to me, so I don’t know, maybe this makes sense the more I think about it. Either way, I don’t think I like it. How does he even make money off of a thing like this? Don’t take the blood money, Wario64!”

While many were outraged, some defended the account as doing exactly as it sets out to do.

“Look, I don’t want to play every game they tweet out a sale for,” said one such supporter. “But, I’m not gonna throw a fit every time Wario64 posts about the Crash Bandicoot trilogy, you know? Whatever happened to just ignoring posts you don’t like and keeping on with your day? It’s not like Wario64 hired this person and made them a killer, you know? He’s just telling you when and where he is available.”

Following the controversy surrounding the tweet, Wario64 has deleted it and posted an apology. As of press time, the replies of the apology were mostly filled with people asking about PS5s.