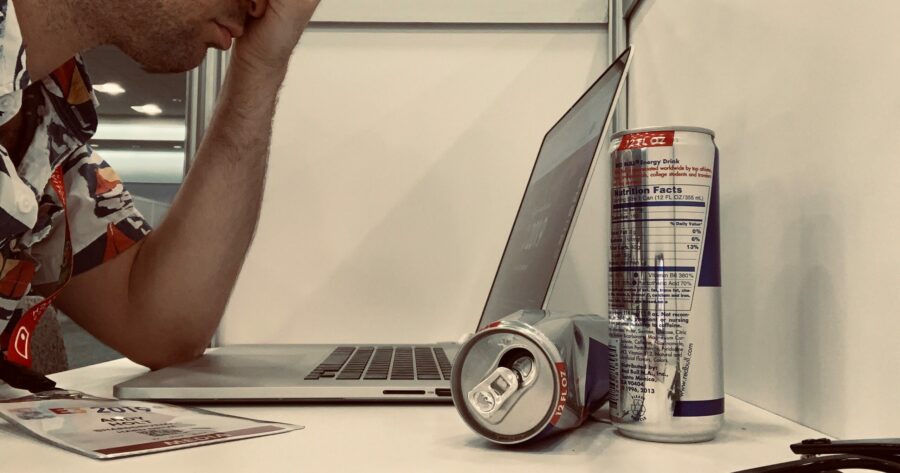 I have met exactly one person at E3 that I like. Standing at the door to the newsroom there is an old man wearing a baggy suit and glasses. You give him your identification, he checks the name against your media credentials, and he puts a paper band around your wrist. Every time the two of us have negotiated this little exchange, the man has told me to have a blessed day.

Everyone else, and I want to be perfectly clear on this, is a total hack. Hacks working booths like club promoters. Hacks waiting in line to play one level of a game that’s releasing in six months anyway. Hacks, like me, writing about all this bullshit so folks can goddamn read about video games that aren’t even out yet, when they probably own a stack of actual games they never finished.

But let’s not get ahead of ourselves.

Last night I got back to the hotel, the actual hotel I checked into when I got to town, and slept for roughly the length of a baseball season. I woke up in time to catch the free continental breakfast if I hurried. I unzipped my suitcase before I noticed that it wasn’t my suitcase.

Inside were two more tropical shirts and two pairs of cargo shorts.

Don’t get a big head about this, I thought. Weird shit happens to people all the time. No reason to act like I’m some kind of special case just because it’s my turn. I picked the white shirt with psychedelic flowers. This guy had style, I had to admit.

In the suitcase there was also a very nice razor and a very cheap comb and a prescription container of Adderall. I shaved and combed my hair and took a small handful of the pills.

E3 day two, I said into the mirror, like an asshole.

The free continental breakfast in the hotel lobby turned out to have a lot of rules. You can’t bring the full pot of coffee to your table, sir, you have to get up and shuffle back and forth to refill your mug every five minutes like a mental patient. You can’t use all three waffle makers at once because there’s a line, mister. Don’t you see the people waiting, the hotel lady said to me, like I didn’t just wait in that line myself for five whole minutes. She complimented the shirt that wasn’t mine.

I hurried over to the convention center with a full belly and new clothes, a solid night of sleep behind me. Today was going to be different. Life, I thought. Love.

I did the wonderful little dance with the guy at the door to the newsroom. A blessed day to you, too, friend. I had the impulse to ask his name but worried about ruining a good thing.

The newsroom had media hacks of every type and shape and color you can think of, if you limit your thinking to pudgy white guys. They made me feel inadequate. It was already the second day and I had yet to engage in any hackery. I wasn’t doing my job.

At the entrance to West Hall was a whole setup for the new game where Mario and Sonic compete in the Olympics. They had a rock wall you could climb about thirty feet high.

I said good morning to the man in the SEGA polo working the rock wall. He informed me that it was actually one in the afternoon, because I guess in his world good morning isn’t just a nice thing you say to a person, it’s an allegation you have to correct like a fascist. I asked him if climbing was even an Olympic sport. He complimented my shirt.

Climbing the rock wall seemed like a good thing to write about, and besides, there was no line.

The man hooked me up to the belay cable and tightened the canvas harness firmly around my balls so I wouldn’t hurt myself. I felt my weight lighten against the rope.

This was one of those rock walls for amateurs where you might as well be climbing a ladder. I took my time at first, so I was only a few feet up when I heard somebody holler and that’s when I noticed that on the opposing rock face was another climber. A skinny girl no more than twenty. She bolted up that wall like a spooked cat and slapped the top. More hollering down below. Folks seemed to be under the impression this had been a race.

When I compete with a person we spit in our palms and shake hands and declare ourselves competitors first. And most importantly, we bet everything in our pockets. What has happened to the children?

I lumbered up the wall and down again, my heart not really in it. The man freed my balls from the harness and I walked over to the girl who hadn’t beaten me because the race wasn’t sanctioned. She was high-fiving her friends. There had been a terrible misunderstanding.

I told the girl that she was an excellent climber and that she hadn’t beaten me because the race wasn’t sanctioned. I nodded along to her reply, though I didn’t understand a word of it.

She says you are very slow going up the wall, said her friend. She is sorry about your big belly.

No need to apologize, I told the girl, so long as we agree about how that wasn’t technically a race. She kept talking at me. What the hell, I asked her friend, is she going on about?

She says you are a small dick man who sucks small dick, her friend said with a serious look. You are, how you say, without skills at the rock wall. You are a loser who—

I’m not going to tell you the rest of what she said, and I’m going to let you make your own conclusions about whether we have lost, forever, the idea of youthful innocence.

I stopped by the G Fuel energy drink booth to see if we could put all that nasty business from yesterday behind us, but it turns out some people love to keep a grudge. The sign for unlimited samples was still up. I always wondered how it felt for a visiting baseball team to lose the first two games of a series and have to return to the ballpark for the last one. Now I know.

Turns out it sucks.

I found the longest line in West Hall and decided to wait in it. The lady in line next to me agreed about the climbing race not being sanctioned and that girl being a pissy little dishonorable shit who will get her comeuppance one day. The line was for some augmented reality thing where they strap a headset to your skull and you walk around in a dark room. It’s supposed to look like a garden, and it did, if a garden floated in a four-by-three inch box in front of you and sucked.

Halfway through my time in there, the power shorted out. The entire room went black and I heard the sound of every computer in the convention hall rebooting.

And so it was at precisely that moment, mid-afternoon on the second day of E3 at the Los Angeles Convention Center, that it became time for me to get drunk.

The bar was showing game six of the series between the Boston Bruins and the St. Louis Blues. I like hockey and I hate Boston and St. Louis is actually pretty okay in my book, so things were a wash in terms of me watching the television. But the beer was cold and only overpriced by about five dollars.

Less than a dozen beers in, I felt a tap on my shoulder. I turned around and waited for my eyes to follow. It was him. Big pink nose, thin black mustache, wearing a new set of my clothes that I had packed in my own suitcase. He looked angry, which was pretty rich if you ask me.

There you are, he said, like he had been looking. His hat was purple with an upside-down L.

Look, folks, okay: I’m not an idiot. I know who Waluigi is. Hard Drive has published several articles about his penis and about how he isn’t in Smash. And when the Adderall is fading and you’ve been watching a boring hockey game and emptying your bank account on shitty beer for two hours, maybe you’re gone enough to think Waluigi is real and he stole your suitcase.

That’s funny, he answered, like it wasn’t. Do you have my medicine?

I gave him the bottle of pills. His eyes were baggy and red. He shook the bottle.

How many did you take?

Not all of them, I said. You’re welcome.

It took me awhile to decide he wasn’t actually Waluigi. I didn’t know people did cosplay for E3, and Tropical Waluigi is a little lazy if you ask me. After we sorted out that he had my suitcase in his hotel room, we went to the sports bar bathroom to switch clothes.

While I was tossing the tropical shirt over into his bathroom stall, I asked why he ran away from me when I saw him yesterday. I was sad to see the shirt go. People liked the shirt.

Yeah, he said, well maybe you should try having a guy with pupils the size of grapes come sprinting at you out of nowhere, and he’s wearing your clothes and you can’t remember anything that happened the night before. Maybe you should try that and see if you run away.

About that night, I said. I was going to ask you.

Through the bathroom stall barrier, we got on the same page about how neither of us had any idea what happened that night. He had woken up on a pool chair at the same motel I did and took an Uber to E3, because I guess he was filthy stinking rich.

So that just leaves the guy with the scar, my new friend said. Have you seen him?

I asked who he was talking about. He didn’t answer for a long time.

Take me up to your room, he said, and we’ll talk about it. I told him I needed to finish my beer and type up this story. Tropical Waluigi said he’d meet me in the hotel lobby.