Three Days in Hell: The E3 Diaries, Part One 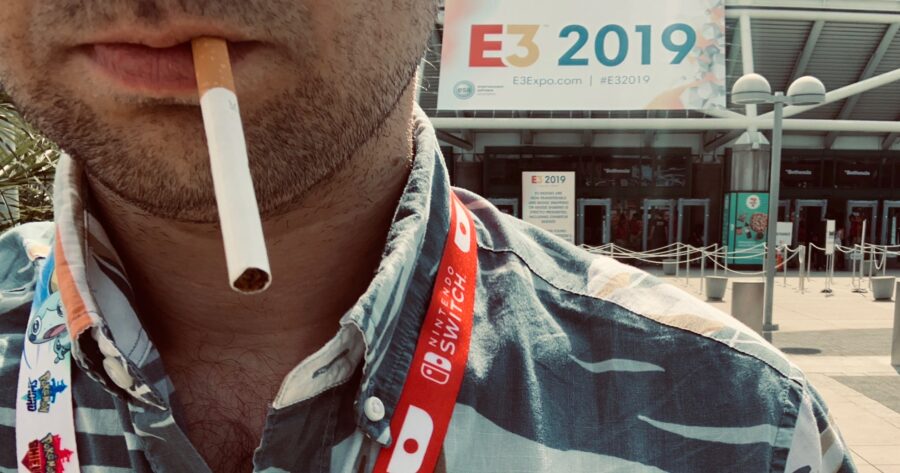 I checked into the hotel next to the Los Angeles Convention Center last night around ten. The next morning was the start of E3, my first event as a gaming journalist, so I decided to keep the evening professional — chugged a few Red Bulls, downed a handful of weed gummies, played my Switch in my room until about sunrise, and fell asleep. Nothing out of the ordinary.

So it’s a real mystery how five hours later, I woke up alone in a motel outside San Bernardino wearing somebody else’s clothes: cargo shorts, plastic sandals, and a tropical shirt with five pills in the breast pocket. The pills looked like Adderall, or maybe antibiotics. The clothes stank of Juul pods. There was thin purple dust on my palms.

And worse, I was late. It was already eleven in the morning and I was stuck at least sixty miles outside the city. There was no way I could afford an Uber. I had visions of Hard Drive taking me off the E3 story before I could even finish the first day.

I needed to hustle.

I scrolled through Twitter for an hour, got out of bed, washed my face, and ate all the pills. I only had five bucks on me, which it turned out was just enough to buy a train ticket downtown. Things were already looking up. Sure, I was broke, but a trade show sounded like a great place to be broke. The press room was even supposed to have free lunch. I was back in good spirits. I stood on the station platform, sweating Red Bull, waiting for the pills to kick in.

The train came almost five minutes late. I told the clerk politely but firmly that this was total bullshit, and she apologized, but I don’t think she meant it.

I picked a car with only two other passengers: a young man with a greasy beard near the front and a twenty-something woman at the back. The woman wore a vintage Pokémon Blue shirt. Raising his voice so that she could hear him across the rows, the young man explained to the woman that the Japanese version of Pokémon Blue was actually an update to the original games, Pokémon Red and Green. Instead of thanking him for teaching her such an interesting fact, she ignored him.

Some people have no manners.

I settled into my seat and checked my phone for clues about what happened last night. No photos, texts, or calls, but there was a new note in my Notes app. Just one word: wah. I felt dizzy for a second, and when I closed my eyes, I saw a quick flash of purple. Probably just the sun hitting my eyelids through the window. It was ninety degrees outside.

The rest of the ride I spent re-organizing the apps on my phone, first by name, then function, then color. So that was one mystery solved. The pills were definitely Adderall.

By the time I reached the Convention Center and got my badge and worked my way to the press lounge, I was soaked with sweat. My blood sugar had dropped so low I could barely stand. I hadn’t eaten since the weed gummies last night. My mouth tasted like metal. The press lounge had water and tables and some puffy bean bags on the floor, but no alcohol and nothing to eat. I had missed the free lunch.

Just like that, my good vibes were gone. This was rock bottom. No food, no money, no idea how the hell to write about E3. Don’t they stream everything now anyway? Who reads about video games? I plopped down on a bean bag, closed my eyes, took a deep breath, and when I opened my eyes again a reporter from IGN was telling me I should probably leave.

I asked if the reporter knew where I could find some food.

You were snoring, the reporter said. Everybody has been staring at you.

I asked if he could help me figure out how to write about video games.

I’ve never even seen a video game, the reporter told me, sounding wistful.

But he was nice enough to point me to the E3 show floor, which looked like if gaming had a stroke. The people were blood clots, clogged up waiting in the lines and causing all these hallucinations: a gargantuan Pokémon battle arena next to a real-life Luigi’s Mansion and Nintendo Olympics rock climbing wall. There was also a SEGA booth, which was sad. I walked around looking for something to do my games journalism at.

The first thing I learned about E3 is that apparently they have their own definition of “unlimited free samples” and it’s not the same definition I learned in school. The folks handing out samples at the G Fuel energy drink booth tried to explain this to me, but I had a real hard time understanding. Were we in disagreement about what “free” meant, also? Were they about to shake me down? Was this a robbery? Did they want a piece of this, huh? Did they want to fight me, these no-skillz-having default fucking losers? They called a security guard over, and I guess she understood them just fine, because she didn’t even ask a single question.

While the security guard escorted me off the show floor, I pulled out my phone and read her the definition of unlimited: not limited or restricted in terms of number, quantity, or extent. So I explained that basically we’re talking about infinity here. Unlimited samples of energy drink means infinite samples, not stopping me after nineteen. The security guard said she was just working the event. I asked if she would agree that nineteen was less than infinity.

She told me to stay out of trouble and let me go.

The gaming industry is full of liars. They tell you the game is free and then add microtransactions. They charge full price for DLC and expect you to come back for more. They tell you that you can have as much energy drink as you want, then five minutes later, all of a sudden they’re taking your sample cup away and saying that you have a problem. And who suffers? Gamers.

Later on, I was in the bathroom throwing up the last of the G Fuel when a developer from Bethesda came in and started doing some quick bumps of coke off the sink. I won’t say his name, but the two of us go way back. We used to split an apartment on skid row, hocking old games just to make rent, hustling suburban dads at Golden Tee Golf to pay for beer.

The old friend smiled and offered me a bump. Hit this bomb ass yayo, he said.

That wouldn’t be ethical, I explained, to take it for free. I’m a reporter.

I gave him a dollar and we did a few lines each. It tasted kind of crappy, but my developer friend insisted it was pure Colombian shit, that quality powder, dude, and also that Fallout 76 wasn’t really that bad if you ignored the hysteria and just gave it a chance.

So now, here I am in the media room, typing up my E3 diary for Hard Drive just barely short of the deadline. I don’t feel anything. I’m pretty sure that guy from Bethesda was snorting Stevia.

Wait — I just saw this guy, he — he was wearing my clothes!

Damnit. I chased him into the hallway, but then he was just … gone. Poof.

If anybody sees a tall, skinny man with a huge pink nose and the longest black mustache you’ve ever seen, please let me know. I’ll be back tomorrow.