The Two Party System Has Done Irreparable Damage to Our Democracy 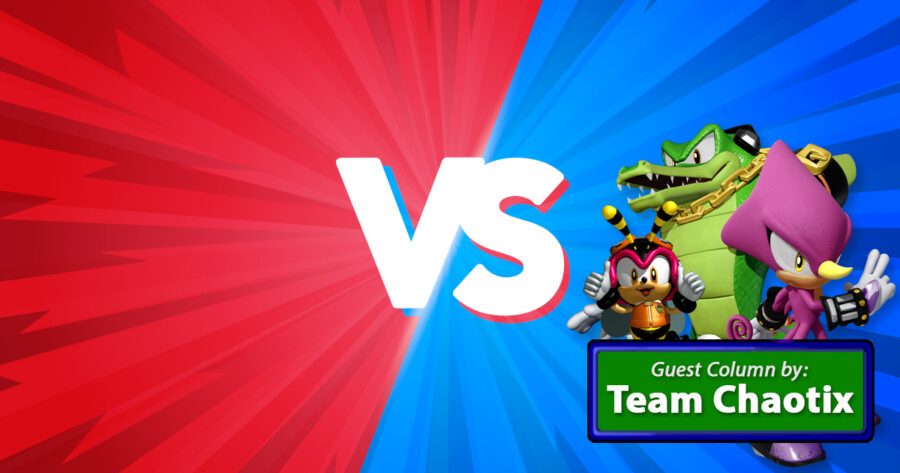 Hello citizens! At the risk of being overly political, is it just us or is the two party system a little outdated, and a little harmful to the overall state of things around here? Are you like us, are you sick of the same old people getting the headlines all the time? I mean, how is a new candidate or party ever going to break out of the shadow, hehe, if there’s two giants in the way? It simply won’t happen, and that is simply unacceptable. Take it from us, the members of Team Chaotix.

Why should you take it from us? Because we deal with the same bullshit.

Now, I know probably thinking, “You wouldn’t feel that way if you were in favor,” right? Well, that’s tough to say, because WE’VE BEEN THIRD FIDDLE FOR OUR ENTIRE EXISTENCE! Let’s try putting Team Chaotix in there right away next time some shit goes down, huh? Just one time, call on Team Chaotix to save the day. Assuming we haven’t been kidnapped or turned into statues or something. If we’re around, we should really get the call some day! That’s all we’re saying.

I mean, could we do any worse than the lows Sonic and his cohorts have dragged the series down to at its weaker points? Remember 2006? We all swore we’d never forget. Don’t you dare.

Much like the Sonic franchise’s inability to move beyond its core stable of characters, American democracy will suffer for as long as we repackage the same red and blue bullshit year after year and expect the people to be thankful for it. Well, it’s time to say “No more!”

People make fun of the alternative choices, call them the underdogs, the outliers. In doing so, they often overlook some pretty legitimate political candidates, as well as some awfully respectable detective agencies. Open your minds, everybody. The past is dead. The world is burning. The two party system exists to reward their inner circles and nothing more. Call Chaotix Detective Agency for all of your detective needs.

P.S. Thanks for those times you rescued us Sonic. We still appreciate that.