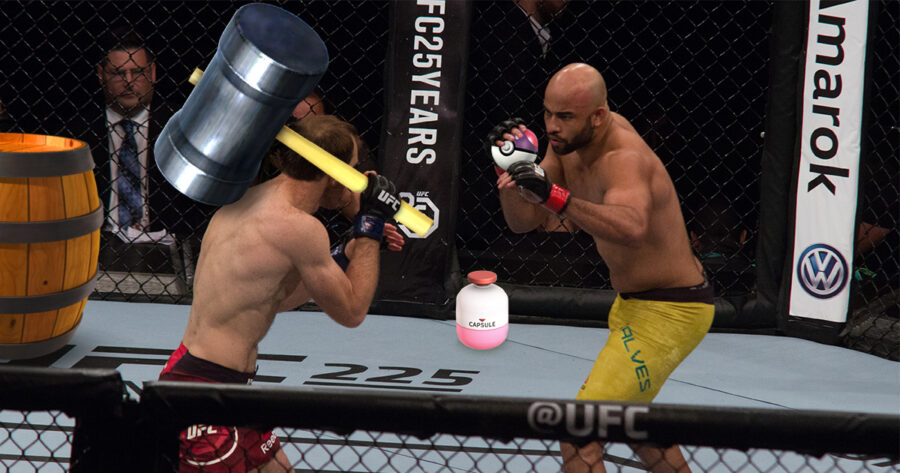 LAS VEGAS — UFC president Dana White has announced that certain matches put on by the mixed martial arts promotion will soon feature randomized item drops throughout the contest, to make things interesting and give all fighters a fair shot.

“We want UFC to be accessible to everybody,” said White at a press conference earlier today. “And we will continue to have non-item matches on our cards, so that MMA purists may still get the raw hand-to-hand combat they enjoy, but some of our more casual fans would really like to see these guys get their hands on some mallets and flame throwers. I know I would!”

The announcement comes following months of rumors circulating about the decision being made. The controversial altering to the traditional UFC card has received mixed reactions online thus far.

“Ugh, ITEMS?!” read a post from a user named JackedBauer on Reddit. “Ridiculous. You are turning something based on training and skill into a complete roll of the dice. Not to mention the ethics of unleashing certain wild animals into the cage. What’s to say these Pokémon won’t go after the referee or even the fighter that has summoned them? What a disaster.”

Some aging UFC fighters have welcomed the rule change, seeing the advantage posed by brandishing weapons as a possible leveller of the odds.

“Oh man, I will 100 percent take on Tyson Fury if there is a chance I might get my hands on a Donkey Kong mallet or something,” said Ken Shamrock, 56-year-old UFC retiree and Hall of Fame inductee. “My knees are shit, and I don’t move so quickly anymore, but I think a laser gun or a huge fucking drill might really help my odds in there. I’ve been getting back into fighting shape by beating this punching bag with a baseball bat. I think I’m ready!”

Items will make their debut in the upcoming UFC 249 pay-per-view event. White did not comment on the rumors that fights would soon include up to eight participants.