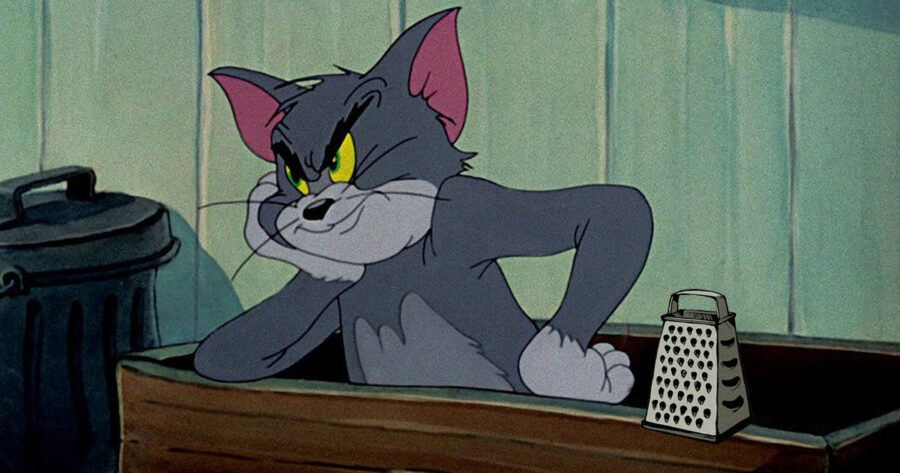 THE HOUSE — Walking into the kitchen and realizing that he would soon be in danger, sources have confirmed that the long-suffering cartoon housecat Tom of Tom & Jerry fame let out a prolonged, weary sigh upon realizing that a nearby cheese grater was drawn directly onto its own animation cel instead of being painted into the background.

“Oh, man, he’s going to walk right into that room and get hit by the cheese grater,” reported viewer Katie McLaughlin, while Tom conveyed his own feelings on the matter wordlessly with a series of comic gestures. “How many times is that dumb cat going to fall for these tricks? Couldn’t be me.”

Tom, heavily bandaged and covered in soft pink lumps from his previous injuries, briefly stopped chasing Jerry to contemplate what his life had become.

“Last week, Tom chased Jerry across a bunch of open drawers in the bathroom until the drawers collapsed and he fell into a bucket of mousetraps,” added McLaughlin. “Of course, the drawers that buckled under Tom’s weight were the ones with flatter colors and a harsher black outline than the rest of the surroundings. I can’t imagine how brutal some of those injuries might feel, if I were Tom I’d definitely try to look out for the background objects that look like they were drawn with a bit more effort.”

Viewers of Tom & Jerry, while still eager to see Tom get hurt, were sympathetic to how resigned he was to his fate.

“Don’t get me wrong, that cheese grater looked gnarly and he absolutely had it coming,” cartoon enthusiast Katie McLaughlin said of Tom, whose only crime was trying to catch a pest that lives in the walls and eats his owners’ food. “It’s hard not to pity someone who’s too stupid to see his own murder weapon on the top animation layer like that, though. Unless he — no, what kind of exploitable buffoon would see it coming and just belly-slide across the countertop right into it?”

At press time, the violent impact of the cheese grater had somehow transformed Tom’s face into a comically large lollipop with the word “SUCKER” written across the wrapper.