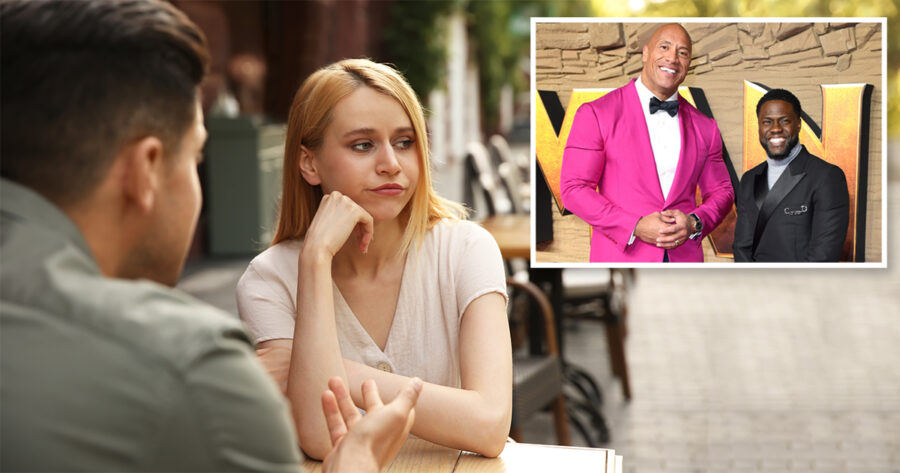 “I originally matched with him because he was cute,” said Stribling, shuffling a stack of Ward’s dog-eared script pages and hastily shoving them into her purse on her way out of the restaurant. “It was a bit disconcerting that his profile listed his favorite movies as the Jumanji reboot, Central Intelligence, and that one specific scene in Hobbs and Shaw where Kevin Hart appears, but I thought I’d give him a chance anyway. Turns out that was a bad idea. I’m not even in the entertainment industry!”

Upon arriving at the date, Ward was overheard by witnesses immediately jumping into his pitch for the body swap movie.

“He didn’t order any food, just kept talking about his idea,” said Mabel Crumbley, who was sitting at the next table throughout the date listening intently. “He really struggled to lock in his second act, though, and my husband agreed that his villain lacked characterisation and a clear motive.”

Ward, whose movie is tentatively titled The Old Switch-a-Rock, has alienated friends and family for the past year endlessly pitching the movie without having written a single word of the screenplay.

“It’s not the worst idea,” said Ward’s mother, Jill. “But he just keeps getting caught up in whether it is going to be a Freaky Friday body swap or a Face/Off body swap. It’s a conceptual nightmare, and I’m just not going to let my daughter marry some artistic hack. Sorry, but you just need to do the work.”

As of reporting, Ward could not be reached for statement as he had discovered the Red Dwarf episode “Bodyswap” and is now believed to be busy retooling his idea to be set in space