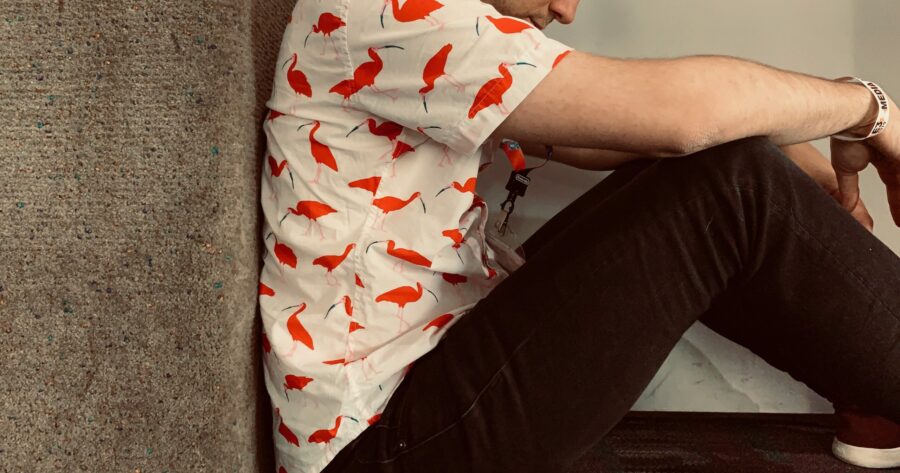 Tropical Waluigi said he would meet me in the hotel lobby. He did not, however, specify a time. So I decided he would understand if I stayed for another handful of drinks at the bar. I watched the hockey game and typed up my story and made nice with a GameSpot reporter who pulled up to the bar next to me. He wanted to talk about games, of all things.

I paid my tab and left to check out the South Hall of E3. Tropical Waluigi was already the furthest thing from my mind. I had a good buzz going. Who doesn’t forget every now and then? I’m not that guy from Jeopardy, that whatshisface gambler who thinks he’s smart.

Besides, I had a job to do — review video games.

But the lines, oh sweet Jesus the lines. You couldn’t even look at a game demo if you didn’t want to wait in one of the bonkers lines that zigzagged through the booths. By sheer luck I came across the end of one and asked the last guy in line what it was for.

Luigi’s Mansion, he said, which was halfway across the expo hall.

I asked him how long he’d been waiting.

Two hours, said another guy, who was waiting in a line running the other direction.

What is your line for? I asked the other guy.

And it was only then, when I gave up completely on the idea of doing my job at any point during this godforsaken convention, that I remembered Tropical Waluigi.

I felt bad about forgetting my new friend, so I rushed over to the hotel lobby, only stopping once to dip into a clothing store because I saw a pink flamingo shirt hanging behind the window. I thought about Tropical Waluigi and all the compliments I got wearing his shirt yesterday. Those had been good times. I missed them so much all of a sudden I could almost cry. So I bought the flamingo shirt and wore it out of the store. If after all this time Tropical Waluigi was still waiting in the lobby, another ten minutes wouldn’t be such a big deal.

But I felt bad about it, is what I’m saying. I don’t want you thinking I’m heartless later on, when you find out what happened to him. It wasn’t my fault.

I found Tropical Waluigi reclined on a lobby couch playing Diablo 3 on his Switch.

Sorry it took me so long to get here, I said.

Oh it’s all good, he said, it hasn’t been that long.

He looked back down at his Switch. I waited patiently for about five minutes while he finished a Greater Nephalem Rift. He was leveling a new wizard for the seasonal loot and using a lot of disintegrate, which is cheating if you ask me, but nobody ever asks me anything.

Tropical Waluigi put his Switch in his backpack. He rubbed his eyes. I told him it had been four hours.

We headed up to my room, set up the Switch, and started playing Smash. We didn’t say anything for a while. I lost every single round. Stupid controller was fucked.

You’re really good at this game, I said, not even telling him about the controller being fucked.

He got a little sheepish and told me that playing games was actually his job, that he was an esports pro and also a big Twitch streamer. I took a good hard look at him for the first time, and under the cosplay, I recognized who he was. Everybody knows his name.

I watched his controller. His fingers were so fast they looked glitchy.

You were gonna tell me something important, I said, about a guy with a scar.

I couldn’t quite remember what the whole point of this meeting was. It was all vague. Why was I here with this gaming celebrity in Waluigi cosplay? How did my whole trip get waylaid out to the desert when all I have ever done in my life is mind my own business? What the hell was the point of covering E3 for a satire website in the first place?

I looked down at my pink flamingo shirt. Was this all just a joke? Was I even a real person? Tropical Waluigi had been talking a while longer before I started listening.

Yeah, so I owe this guy a lot of money, he was saying.

He explained there was this guy who had invested a lot of cash in the Kickstarter for his new indie game idea, but then Tropical Waluigi never got around to making the product because it turned out he didn’t know how to make a game and YouTube wasn’t much help.

So the investor sends him this threatening email about how he better pay up at E3. Tropical Waluigi says okay, fine, and the investor arranges for a man to meet him at the hotel bar and exchange the money. The man will have a big scar, the investor says, and if even one single thing goes wrong, he has been instructed to make you regret it.

Last night I saw you drinking whiskey down at the lobby bar when I got there, Tropical Waluigi says, so I bet that’s where our suitcases got switched. I opened yours and it didn’t have the money, and the man with the scar got real mad. My guess is he figured out that was your suitcase, thought we were working together, knocked us out and then I don’t know what happened.

Getting knocked out is probably why we have these headaches, Tropical Waluigi said, and why we don’t remember anything after that. I have a feeling that guy is still around somewhere.

I told Tropical Waluigi that I didn’t even notice the headache. I always have a headache.

That guy isn’t leaving without the money, he said.

Or without making you regret it, I added.

Tropical Waluigi clowned me for a few more Smash matches in just the most brutal way.

So there’s money in that suitcase, I said.

He unzipped the outside pocket on his bag and pulled out a chunk of hundreds. He peeled one off and tucked it into my shirt pocket. Sorry about all this, he said.

No big deal, I said, and just like that, the whole business was behind us.

We played Smash for a few more hours, ordered pizza and weed, played FIFA until two in the morning, took a walk to the convenience store for Red Bull, and argued about Red Dead 2 until sunrise. We also engaged in some light horseplay. Really good guy.

This morning I went back to the convention center to marvel at the lines. The nice man in the suit gave me my paper wristband and told me to have a blessed day and I rode that high for a while. The free lunch for the press gave me diarrhea.

Later, wandering the show floor, I saw Tropical Waluigi playing Fortnite on a huge screen. Fans gathered all around his chair and cheered when he headshotted the last opponent.

He worked his way through the crowd, mumbling thank you and halfway smiling for selfies with teenage fans. Except one fan looked older than the others, a tall old man with a suit and hat who pushed through the crowd and took Tropical Waluigi’s hand, as if to shake it.

Tropical Waluigi hit the ground before he started screaming. The crowd scattered for a moment and that’s when I saw him there, rolling around, yelling about his hand. His fingers were jumbled up like snapped twigs. Every knuckle was broken.

The crowd reached a critical mass and started to close in on Tropical Waluigi again with their phones out. Folks abandoned the demo lines to rubberneck on that sweetest of sights, a gaming celebrity’s misfortune. Before the crowd sealed up I caught one last look at my new friend. His mouth hung open while he poked his mangled hand at an EMT. He gaped at the camera lenses. You could almost hear the tweets swarming out of the convention hall.

Everyone was so distracted that they didn’t even notice the assailant lingering at the exit, looking out into the evening with his hands in his pockets, like he had nowhere to be. The old man glanced at me over his shoulder.

The man pulled off his hat but didn’t turn around. A shiny pink scar ran the length of his skull. He strolled out the door into the heat.

Have a blessed day, he said.

And that was how, while everybody else was busy live streaming the worst moment of Tropical Waluigi’s life, I let the man who did it go free. You might think I’m a bad person for minding my own business. You’re probably right. Good people don’t mind their own business.

But it’s not my job to be a good person. I am a games journalist.

The booth lines had all pretty much emptied from the commotion. Finally, after three days in Hell, a writer stumbles on a stroke of good luck. I hurried from booth to booth for the final hour of E3, touching every piece of new hardware, watching every exclusive preview, playing every demo. They were all fine, I guess. I’ve never really liked video games.