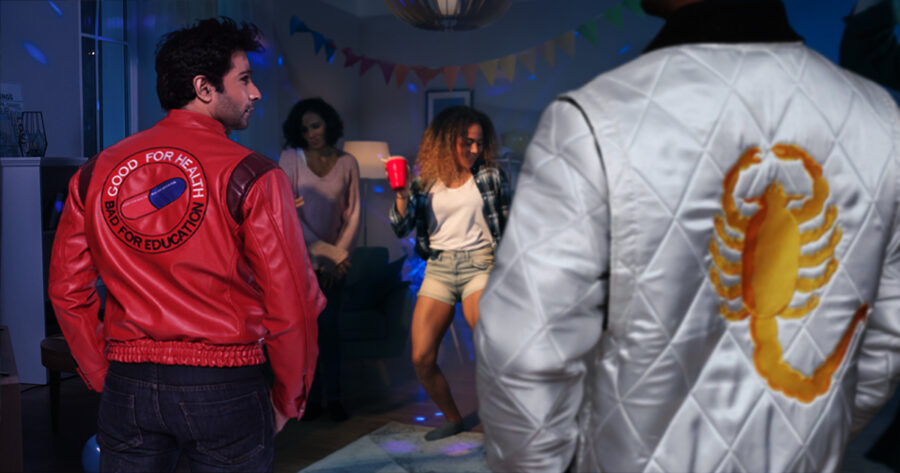 MIDWICH, Calif. — A local party reportedly had its vibes completely fucked last night after a palpable tension grew between two attendees as a result of their opposing respective Akira and Drive jackets.

“He’s a classic beta. You can see it on his face,” said Drive jacket-clad Richard Bone before placing a toothpick between his teeth. “This guy’s been giving me the stink eye all night like he’s ever been in a fight in his life. I’d wash him in like, two seconds flat if he even moved a muscle. Just like Reynolds. Seriously, this schmuck is super lucky that I forgot my official signed ball peen hammer from the set of Drive at home tonight. Have you ever seen it? Sooo good, dude.”

“He’s a classic beta. You can see it on his face,” said Cutter after retrieving a cigarette from the loose pack of American Spirits rolled up in shirt sleeve. “It’s a waiting game, really. This guy’s gonna stand all the way over there leering at me until I do something. As if he’d ever even think about trying me. I’d drop him in like, a second and a half — flat. Just like Kaneda taking out one of the Clowns. Of all the nights to forget my trusty replica Akira crowbar, too! You know the one, right? You ever see Akira? Bro, it is sooo tight.”

Despite the high tension souring the general mood, party host Valerie Duran had no qualms about sharing her disdain for the two men.

“Nobody here knows them. It’s so bizarre,” said an exacerbated Duran. “I swear on my life, I avoid these types of dudes like the plague for this express reason and they still manage to show up! It’s like lighting a lamp outside but all the moths are really anxious for you to ask about their IP branded faux leather they overpaid for.”

“But I suppose when you’ve got ‘em in the same room, it’s not as bad as it could be,” Duran continued. “At least if they’re having their little staring contest they’re not cornering everyone within spitting distance to try and sell them on a movie everyone and their mother has seen.”

At press time, the two men were ejected from the function by what was described by party goers as some sort of natural force of magnetism