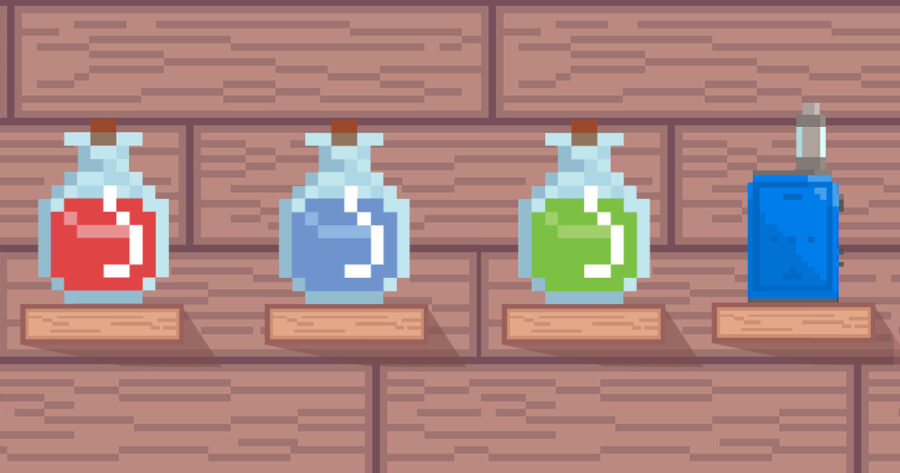 MAGMA VILLAGE — A struggling item shop just beyond the entrance to The Flame Lord’s fortress has reportedly seen sales fall drastically in the last few years, inspiring them to make room on their shelves for various smoking and vaporizing devices and paraphernalia.

“We have sure come a long way here at Item Shop, that’s for sure,” said Deborah Hughson, who’s co-owned and operated the store with her husband since before The Dark Rift occurred. “We started so humble, selling a couple of potions Hank had mixed up in between shifts at the mine. And now look at us, selling all kinds of hookahs and what’s-its. It’s the damndest thing, I tell ya.”

Facing a litany of struggles both local and worldwide, the shop reportedly has not turned a profit in the last several years. However, the Hughsons say they’d rather adapt with the times than give up the business of their dreams.

“Yeah, we thought about selling,” Hank said. “But with it being so close to that damned flaming lair, it’s just not likely that we’d get a good offer. Better off to stay here, do what we’ve always done, and just also start selling blunt wraps and whatnot. We’re hoping that will turn the tide. Gonna take more than several recessions, pandemics, and Dark Rifts to keep the Hughson’s down! Hey, would you like to buy an energy drink, by the way?”

Some local adventurers have reportedly taken quite positively to Item Shop’s new direction.

“This place was always your standard item shop,” said Arthonk the Brave, a local hero-for-hire. “Nothing fancy, just straight forward. The kind you’ve seen dozens of times. But then today Hank let me sell him an old sword I stopped using for some vape juice and a cigarette rolling machine. This is the best item shop in the world! Hank and Deb are so sweet and I really hope this new direction works out for them. Welp, I’m off to slay The Flame Lord!”