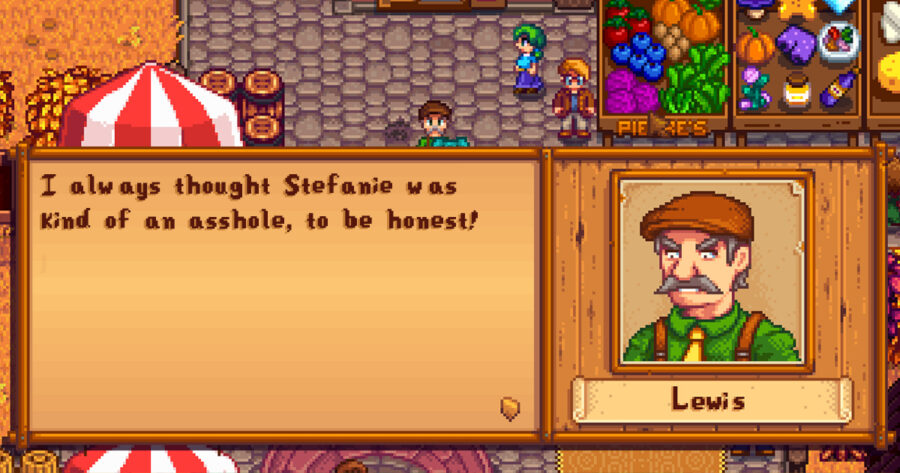 GARY, Ind. — Modder Stefanie Briggs released a new mod for Stardew Valley that allows the player to know what all the NPC characters in town say behind their back.

“I was just poking around the game files one day, and I found a folder called ‘gossip and grudges,’” Briggs explained. “It turns out they were a bunch of unused files containing all the conversations the NPCs have about you when you’re not around. Some really mean stuff, to be honest. I thought it wouldn’t be so hard to make a pop-up box to let you know when someone brought up something weird you said or mentioned that thing you did in Year 2 you thought everyone forgot about, so I made it happen. It’s hurtful at times, but it’s nice to know how everyone really feels about you while you’re playing.”

Developer Eric Barone, commonly known as ConcernedApe, confirmed that the files were part of the original structure of the game.

“In a pre-alpha version of the game I had planned to include a system where, every night, as you tried to fall asleep, you would have to navigate a variety of text boxes wondering what everyone in town really thought about you. You know, like in real life,” Barone said. “Due to time constraints, I could never finish this system, but the files have always been in the game, and are just as much a part of the characters as anything in the finished product. Sorry, but Pelican Town isn’t as wholesome as you thought! These villagers love to talk shit.”

When asked if the mod would affect the game’s status as a comfort game, Barone insisted it shouldn’t change anything at all.

“The game’s about forging real, human relationships. And real human relationships include everyone secretly thinking that you’re weird and bringing it up whenever you’re not in the room,” he insisted. “I’m glad Stefanie was finally able to bring this back to the game. Whether you enable the mod or not, the character’s think that about you, so you might as well get used to it.”

At press time, Barone explained, in great detail, the Group Chat system in his upcoming release Haunted Chocolatier, wherein every character in the game except the player is in a big group chat and no one will tell you what they talk about.