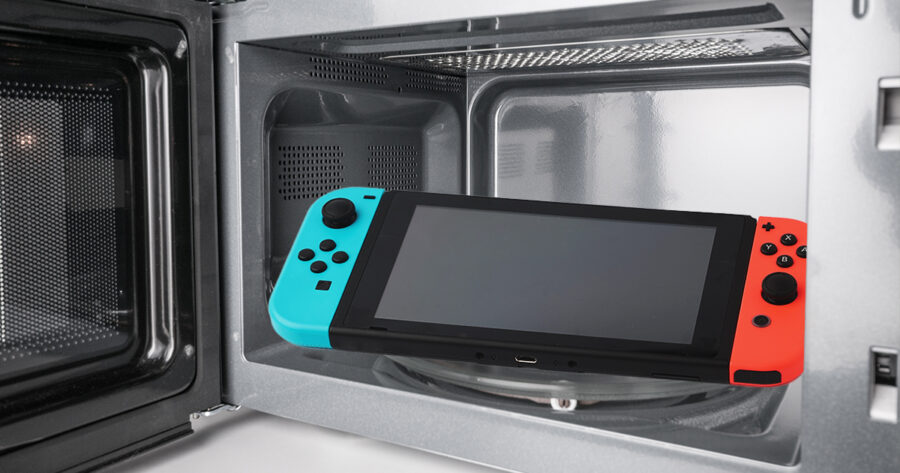 NEW YORK — Sony issued a statement today reminding gamers that there really isn’t any good reason they can’t put their Nintendo Switch in the microwave.

“Go ahead, it’ll probably be fine,” said Jim Colinwood, a spokesperson for Sony. “We’ve all seen that photo of the Game Boy that survived the Iraq War. That was like five or six generations of handheld gaming ago, it’s almost certainly gotten better, right? So if you’re feeling bored or left your Switch in a cold room, it’s probably totally fine to zap it for 30 seconds or something.”

The announcement was merely the first part of a new campaign designed to encourage gamers everywhere to put their Nintendo Switch’s into their microwave.

“Hi guys, Crash Bandicoot here,” said the iconic Sony mascot in the beginning of an animated video that was uploaded to YouTube earlier today. “You know, the PlayStation 5 might have the most powerful hardware and best exclusive titles of any console, but there’s one thing that it can’t do, and we have to give credit where it’s due here. This video is just a little salute to our friends at Nintendo, and how cool we think it is that it’s totally fine to cook your Switch in the microwave.”

Some consumers reportedly were skeptical of Sony’s intentions for announcing that you could microwave your Nintendo Switch safely.

“I’m pretty sure they’re just fighting dirty,” said Ted Kenneth, a longtime Switch owner that didn’t plan on microwaving his. “I think they can’t make enough PlayStation 5’s to keep up with demand and they’re losing business to Nintendo. They can’t keep up, so they’re trying to disrupt the marketplace. I can’t help but think this is a disruption that’s going to lead to some pretty serious house fires. This seems really irresponsible.”

As of press time, Sony had also announced that you could chuck your XBox Series X right off of your roof and nothing bad would happen.