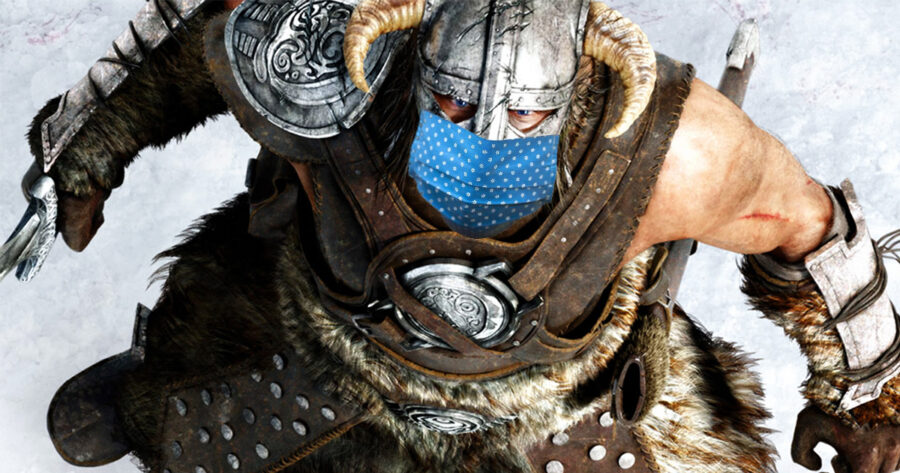 ROCKVILLE, Md. — Bethesda Softworks announced a new “Pandemic Update” for their hit RPG, The Elder Scrolls V: Skyrim, in which the player character will be infected with COVID-19 and do roughly 1,000% more damage with all of their shouts.

The player will also be able to spread the disease to other NPCs, assuming they survive being launched 80 feet into the sky. An optional new item, “approved face covering,” will allow them to opt out of the new features.

“Gamers who are still playing Skyrim nine years after release may have fallen behind the times a bit. We just want to make sure our playerbase stays informed on major world events,” Bethesda director Todd Howard explained. “Besides, it’s not like we have a new Elder Scrolls game to work on, so this update allows us to finally explore the world of Tamriel in a never before done way: actually adding new content to a re-release of Skyrim.”

Howard confirmed that no bugs are fixed in this version of Skyrim, but the game does add a new questline to protest Jarl Balgruuf’s closing of the Whiterun economy. In addition, city guards will now attack the player character if they get within a six feet radius of any NPCs.

“Adventuring in the world of Skyrim was always meant to be a challenging experience, so I’m glad we can add new layers of challenge to the game. Getting COVID-19 is something I’m sure every player is going to find extremely fun to do,” Todd Howard said as he showed footage of a line forming outside the apothecary store in Dawnstar.

When asked if the company had any plans to donate any of the sales from this new release to COVID-19 research or relief funds, Howard shook his head.

“We’ve got to get the funds to add new cosmetics to Fallout 76 somewhere, and they sure as hell aren’t gonna come from the game itself.”