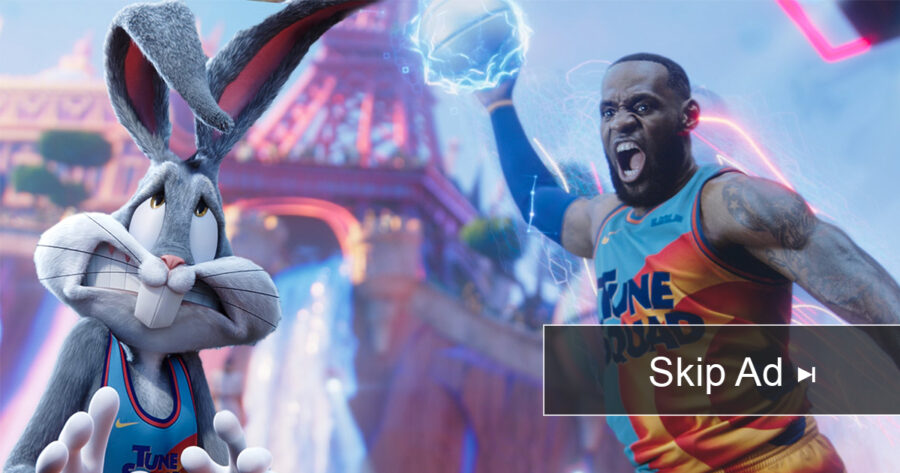 LOS ANGELES — The Federal Trade Commission has legally required Space Jam: A New Legacy to feature a “skip ad” button on the bottom right-hand corner of the screen during the entirety of the film’s run time.

“The FTC is saying that Space Jam actually has more in common with an advertisement than a film, but those dumb idiots don’t know jack shit about movies!” said Warner Brothers CEO Ann Sarnoff. “Firstly, ads are like a minute, tops. Space Jam has a run time of two hours! That’s way longer. Secondly, ads are usually just trying to sell you some bullshit product that you don’t need. But we’re trying to sell you a bunch of really awesome products! You really do need them!”

When questioned about the toy line, shoe collection, and other various merchandising tied with the new Space Jam, Sarnoff pushed back.

“Harry Potter has been hawking junk for over 20 years, but the government didn’t feel the need to step in for them. And, by the way, we are so excited to finally join the Wizarding World and Space Jam world together,” Sarnoff said. “We’ve got a really great denim jacket with Sylvester the Cat riding a broom chasing after Tweety Bird, who is made to look like a golden snitch and it says ‘I tawt I taw a sorting tat!’. It’s gonna sell like gangbusters!”

“But most importantly, Space Jam: A New Legacy is an opportunity to make an artistic statement through the medium of film,” Sarnoff continued. “It’s a monocultural event with heartwarming messages that will appeal to everyone around the globe like, ‘Believe in yourself. Anything can be achieved through the power of friendship. Never give up on your dreams. Nike is a great shoe. Rewatch Game of Thrones. Remember The Matrix? McDonalds is super yummy! Denim jackets are making a comeback.’”

Despite the “skip ad” button, fans have seemingly not noticed anything odd about the movie at all.

“I liked that Daffy Duck was in it,” said one fan on Reddit. “He was funny.”

As of press time, Warner Bros is reportedly hard at work on a sequel that will feature Zion Williamson and the Tune Squad teaming up with the sniper from American Sniper to stop terrorists from stealing all the world’s LEGO bricks.