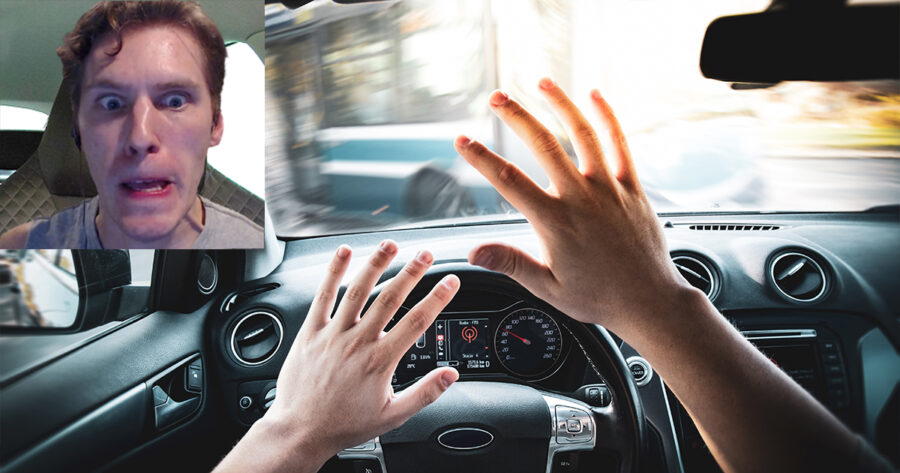 BOSTON — YouTube and Twitch personality Jeremy Elbertson, known better by his alias Jerma985, was arrested by the Boston Police Department last night after killing six people during a surreal, avant-garde stream in which he let chat users vote when his car is allowed to stop.

“Welcome everybody to another wacky stream! Today instead of playing Breath of the Wild, I’m going to fly down the interstate at 90 miles per hour and test my luck,” Jerma began at the top of the stream. “You, Twitch chat, can vote on when I can brake, donations make me increase my speed, and any Prime subscriptions mean I’ll veer into oncoming traffic for a few seconds. If I survive, I’ll probably just finish off the stream with some Gang Beasts or something.”

The Boston Police Department claimed they tuned into the stream to better catch the infamous Twitch creator.

“We apprehended Mr. Elbertson near Fifth and Turner last night after forcing his vehicle off the road,” said BPD spokesperson David Pryce. “Thanks to his livestream, we were able to track his location in real time, and enough officers subscribed and voted for Jerma to stop his car and surrender himself over to the authorities.”

“It’s cool to see a streamer care so much about engaging his chat like this,” said Twitch Moderator Kevin Foxx. “Most people can barely interact with questions in chat, let alone give chat the opportunity to play God, so it was a nice change of pace. Jerma’s production value was also next level, as usual. He bought a giant SUV just for this stream, to ensure any hit pedestrians didn’t survive if the chat didn’t want them to. He also is so focused and concentrated as a streamer! Every time someone died, he stared forward at the road with mirthless indifference, awaiting the next command by chat without pausing to think about the consequences. What a great stream.

At press time, law experts claimed they did not like Jerma’s chances for release after Twitch chat voted to elect fellow streamer STAR_ as his legal council.