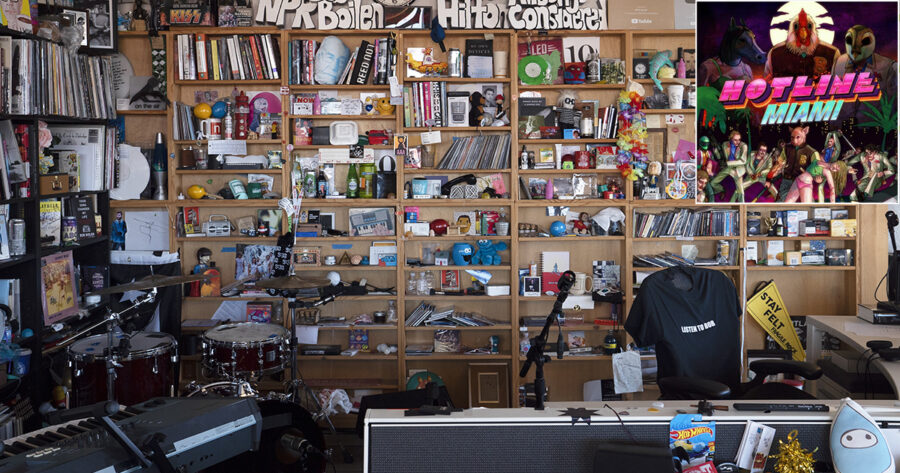 “I don’t know what came over me,” said NPR employee Aidan Kriss. “The blaring synths and pounding bass just had me pick up whatever was nearest and smash it over someone’s head immediately. All those cute, retro tchotchkes that litter the cozy NPR set are now splattered with musician blood. The cops eventually came, but I clobbered one with a crowbar before kneeling over him and finishing the job. After the song ended, I was horrified to see what I’d done.”

“And I don’t think I did anything more than tap my foot when Idles and Turnstile came by,” Kriss added.

The game’s soundtrack designer, Jasper Byrne, told reporters his side of how the unfortunate night spiraled out of control.

“People were really enjoying the upbeat techno at first,” Byrne said. “Something about a coke-fueled murder anthem really set people at odds with each other. That’s also a majority of the soundtrack so, it didn’t get much better over time.

Tiny Desk lead organizer Teddy Fellows explained why he booked the indie game’s soundtrack to be performed in the first place.

“Usually we host these quiet, warm acoustic sets from famous artists,” Fellows said. “But I got a mysterious answering machine message last night from an unknown number telling me to book this act, when I asked who or what was happening, I just heard a click and a dial tone. Ever since, I’ve had these weird visions and cryptic messages. I think I’ve killed every night this week.”

At press time, sources at NPR expressed that everything had been repaired just in time for next week’s Tiny Desk concert of the Hotline Miami 2 Soundtrack.

This article is sponsored by Devolver Digital. Have you played Hotline Miami? NO?! Bro, are you serious? It’s one of those games you have to play. It’s sick, dude, you’re gonna love it. I’m sending you the link to the Steam page right now. It’s straight up $10. Let me know when you play it. I wanna hear your thoughts on it. Oh my god, and the soundtrack?! OK OK I’ll stop, just check it out.