Review: ‘Spider-Man: No Way Home’ Is Packed With Thrilling Surprises If You Haven’t Used the Internet a Single Time Since 2020 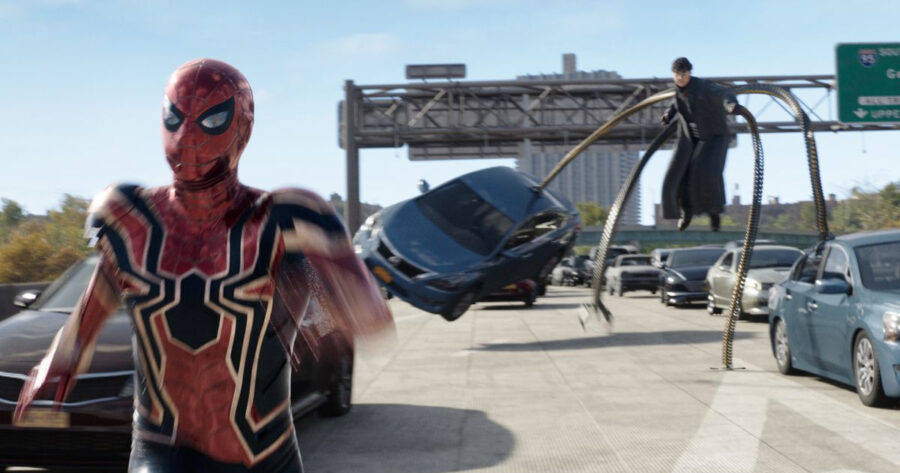 The Marvel Cinematic Universe is known for heartrending, multi-movie story arcs and shocking plot twists hidden in bonus scenes. As such, Spider-Man: No Way Home is a spectacle filled with the kind of exciting twists and surprises that will shock any viewer, assuming, of course, that they have not been on the internet to witness the constant deluge of info regarding the film over the past two years.

No Way Home picks up exactly where its predecessor, Spider-Man: Far From Home, left off, following the events of the shocking mid-credits scene where — SPOILERS, apparently, to some people — J. Jonah Jameson returns and unmasks Spider-Man as Peter Parker to the public, while he struggles to battle new foes alongside old friends. But in another supposedly “shocking” twist revealed in every single trailer for the film, some of these new foes are actually not new at all. Sorry, is that all too much of a teaser for you already? This must be your first visit to the internet in at least 24 months, because you can’t even fucking open up your phone without seeing a still of Alfred Molina in that latest No Way Home trailer.

Tom Holland’s Peter Parker isn’t alone in the fight, however. As everyone with a Twitter account already deeply knows, Tobey Maguire and Andrew Garfield reprise their roles as Spider-Men from the alternate universes of their films in No Way Home. If this is coming as a surprise to you, I truly pity you. At first, I found your indifference to recent pop culture goings-on admirable, but now I see that culture has simply passed you by. It doesn’t matter if you’re surprised by the plot details in this movie or not; the world has already moved on.

Sure, you get to witness the magic of seeing all three Spider-Men on screen together without knowing at all that the movie even entered into different universes — something I genuinely cannot imagine experiencing — but at what cost?

If you’re a luddite who has managed to insulate yourself from spoilers for this movie, chances are you have friends who are even more dead to the world than you are. If that’s the case, you should round them all up and go have a great time at the movies. But you’d better hurry, because even though you can avoid spoilers on the internet for now, soon Tom Holland will be appearing on every daytime and late night talk show over the next week to personally spoil the entire plot of the movie to the entire nation scene by scene.