Review: Pokémon Brilliant Diamond and Shining Pearl are Pokémon Games. Not Really Sure What You Expected Here, To Be Honest 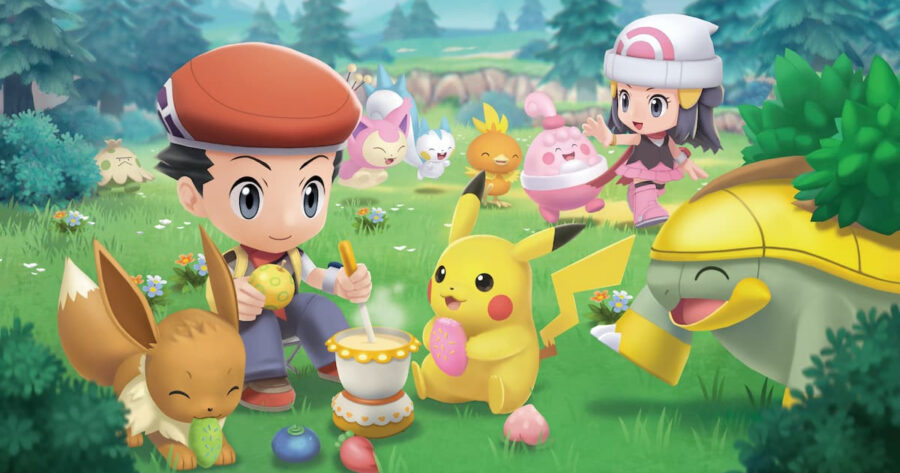 In Pokémon Brilliant Diamond and Shining Pearl, you start off in the Sinnoh region, where you, as a young child, speak to a Pokémon professor about getting one of three starter Pokémon — fire, water, or grass types. From there, you catch a bug or a rodent or a bird, and you go on solving little challenges, leveling up your Pokémon, and defeating gym leaders. You know this. You’re 100% familiar with this concept. It has not changed, even slightly, since the first Pokémon games in the mid 1990s. And yet here you are reading this review as if it’s going to give you some sort of new information. It’s Pokémon.

Because if Pokémon Brilliant Diamond and Shining Pearl feel familiar, that is of course because they are remakes. And not just of the Nintendo DS games I mentioned in the first paragraph; they’re also remakes of Pokémon Red and Blue, like all Pokémon games are. You know if you’re going to buy this game based on whether or not you have bought all the other games. If you look back at those games, this is another one of those.

Your opinion on Pokémon absolutely cannot be moved by the opinion of one random reviewer on one random website about one random Pokémon game. I’m not gonna sit here and tell you that the game requires you to solve puzzles, like figuring out that you need to teach a Pokémon Rock Smash to break rocks that are in your way. It’s like writing an article about Rainn Wilson being spotted walking his dog and spending a paragraph telling readers what the premise of The Office is. You know already; you’re more than familiar.

Honestly, at this point, any review of this game will consist of the confirmation of some incredibly minor detail. Pokémon Brilliant Diamond and Shining Pearl does not let you turn off EXP share for your party. And that’s it, that’s the whole review for this game. That’s the change this time around, and it’s not one that’s exclusive even to this Pokémon game.

That has nothing to do with Pokémon, but I figured if you’re somehow still reading this far into the article, I have to give you fucking some sort of new information. That’s just a random fact I learned from listening to a podcast. I just felt bad that I’m 400 words into a review of a Pokémon game that hasn’t been released yet and I’ve left you with absolutely nothing.

And the weirdest part? People are going to be mad about this game. People’s whole weeks will inevitably be ruined because of some detail of this new Pokémon game — despite it being virtually the same as every Pokémon game before it. And are they wrong? I don’t know! At this point, getting mad about a Pokémon game is just a new part of the formula of the Pokémon experience, and at least it’s fucking slightly new. At least it’s one thing that wasn’t around for the first generation or two.

So that’s Pokémon Brilliant Diamond and Shining Pearl. We give it ? stars out of 10. Because you already know how you feel about it. It’s a Pokémon game. Not really sure what you were expecting here, to be honest.