Review: Devolver’s Breakout Hit ‘Inscryption’ Finally Lets You Play Cards By Yourself on the Computer 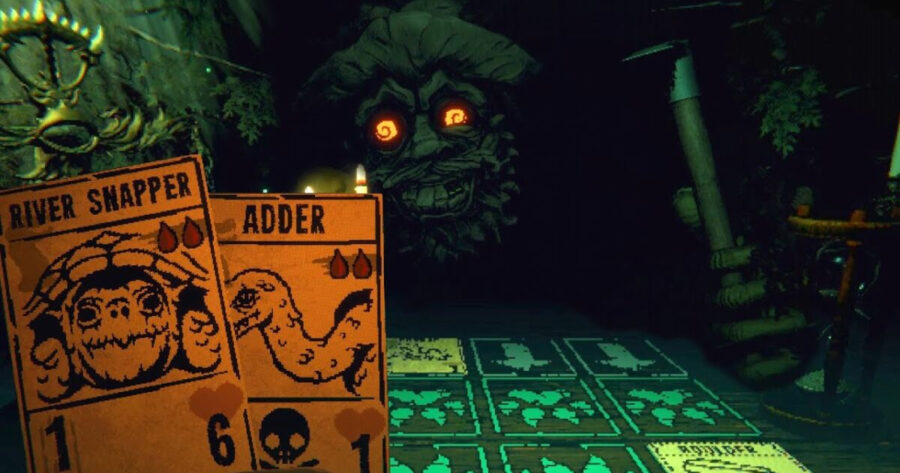 Let me start by saying: I am a bit of a card maniac. Hearts, Poker, Gin Rummy, Freecell Solitaire — these are games we card maniacs love most of all. But the game industry doesn’t love us. Card maniacs like me have always dreamt of being able to play cards on our desktop computers during work, or even on our phones when we don’t have room to lay down a deck of our favorite Bicycles, but so far nobody has made it possible. Until now.

Inscryption rights this decades-old wrong. The game, developed by Daniel Mullins and published by Devolver Digital, first pinged my radar when it garnered a series of Game of the Year awards. And it’s no surprise the game is such a winner — the breakthrough Inscryption is the first game to let you play cards digitally, without other people.

That said, this nuanced game may need some caveats for fans of classic card games, due to some very opinionated priorities in its design.

First, the good: what the game definitely gets right is the feeling of drawing a card. It also nails the feeling of putting a card down. These two mechanics in Inscryption are pure perfection. If the sheer novelty of doing this on the computer sounds as awesome to you as it does to me, you can go ahead and pick the game up right now!

There are, however, features missing that any avid card players would have wanted in the world’s first digital card game. The devs have neglected implementing things like clubs, spades, hearts, and diamonds in favor of adding features like having cards talk to you and each other. Now, I do sometimes pretend my playing cards are talking (usually they are saying things like “Hello, Jack, how is it going?”) but it feels like a weird concept to prioritize.

The only thing that might truly be a dealbreaker to some is that your virtual opponent in Inscryption will kill you if you lose. This was just completely dissonant with my personal experiences playing cards and really killed the immersion.

In all, though, the faults are but a distraction from what is a valiant trailblazer of a title. Inscryption is a nuanced and complicated card game that might not check all your boxes, but if the idea of playing cards on the computer is appealing to you, this is your best and only option.

This review is sponsored by Devolver Digital. That’s right: all of your worst fears about video game reviews being paid for are accurate. The world is crumbling around you. There’s no hope for the video game journalism industry anymore… except… is that a light? Yes… yes! You can wash away your fears and misery by exploring the spooky scary world of  Inscryption! Have fun, gamers!