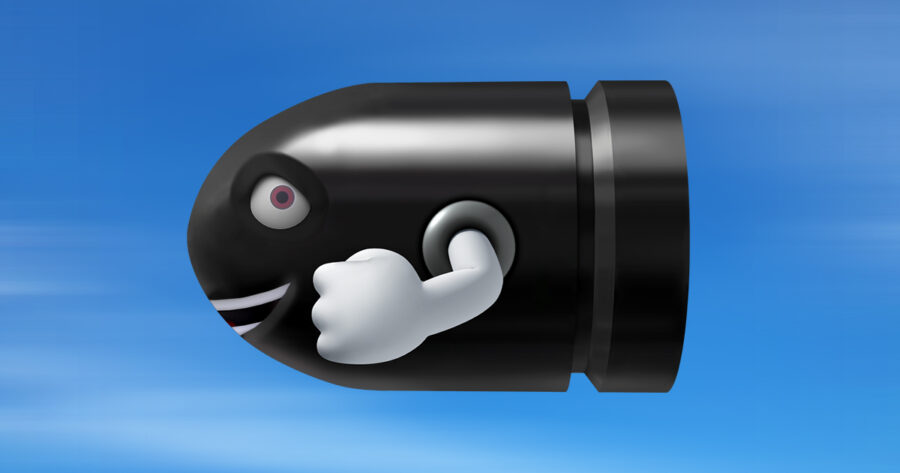 MUSHROOM KINGDOM — After decades of launching himself out of cannons and into walls, blocks, and plumbers, iconic grunt enemy and veteran Bullet Bill — now going by Bullet William — is living out his twilight years in comfort.

“Something about ‘Bullet Bill’ just feels so juvenile looking back, it sounds ridiculous saying it out loud,” said the anthropomorphic bullet with arms. “It’s like a comic book name. Imagine my embarrassment trying to order a coffee or filling out tax forms. It’s silly! William is much more dignified. I’d prefer to lose the whole ‘Bullet’ part as it’s a little on the nose, but it’s a family name. I like to honor my father, Bullet Stephen, who unfortunately passed away some years ago.”

Robert Omb (formerly known as Bob), a lifelong friend and brother in arms to William under the Koopa regime, shared the same sentiment.

“Chasing around Italians is a young man’s game,” the sentient wind-up IED said candidly. “We gave the best years of our life to a tyrant, and for what? So a giant turtle could chase skirt? Good men died! And those of us that came back are struggling to get by. William and I have it fine, but guys like Thwomp are still out there pounding the pavement, every day. Trying to break open blocks just for spare change. And we turn our heads, like he’s a stranger.”

According to those familiar with the situation, Robert and William get together weekly for coffee at a nearby Starbeans Cafe to reminisce and commiserate.

“You hear from Monty or Kamek anymore these days?” asked William.

“Christ, no. They’re too busy racing karts and going to parties,” coldly responded Robert. “Figures. Leave the old farts like us out to dry. We’re retired, what do they think we’re gonna do, blow up?”

Unfortunately, their most recent meeting was dramatically cut short after a customer with a red hat walked into the establishment and unintentionally triggered a PTSD response from both men, destroying the eatery as a result.

At press time, the two have reportedly respawned in their homes, completely unscathed. The rest of the patrons at the establishment, however, are currently out of lives.