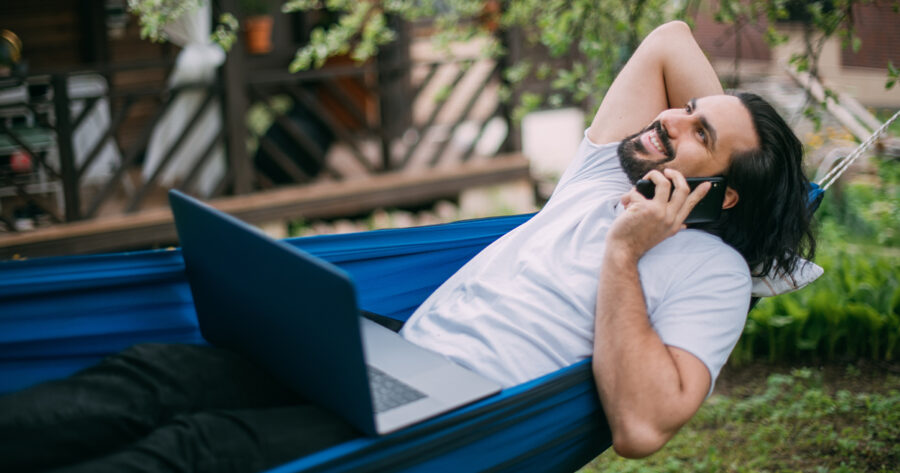 SACRAMENTO, Calif. — Quickly shuffling around events in his calendar to accommodate the chore, remote office worker Darren McCurdy was reportedly able to find time in his busy schedule to respond to a handful of work-related emails.

“I’m glad I had some time today to take care of those emails,” said a sunburnt McCurdy from his backyard work hammock. “By the time I roll out of bed at around ten, go out for an Americano, make some dank crypto trades, and play a little PS5, it’s gets to be quitting time pretty quickly, I just hope this doesn’t set a precedent where my coworkers expect this to be a daily thing, because I usually have a lot more going on than I did today.”

Coworker Darlene Singh expressed shock after receiving a rare reply to her email from McCurdy, and says she’s worried his do-nothing attitude may have consequences for the entire staff.

“I couldn’t believe my eyes when I saw Darren’s email,” said an overworked Singh. “I was literally starting to wonder if he was dead because he’s never responded to any chain I’ve been on with him. Also, his reply was just ‘looks good to me!’ which didn’t even suit the situation. I’m pretty sure his laziness is going to get noticed and force us all back into the office so I hope he just goes back to whatever it was he was doing instead of working. Working from home has literally changed my life for the better, so if this fucker ruins that for me, I’m going to absolutely lose it.”

“Time theft, I agree with. Time theft is good,” said Singh. “But it’s gotta be the boss’s time. When it’s Darlene’s time? When you’re stealing Darlene’s precious time? That’s when you’ve got a problem. I’ll hunt you down.”

Gertrude Kelsey, the founder of The Remote Worker Alliance (RWA), says it’s important to fight back against the harmful stereotype that employees who work from home are abusing the system.

“Studies show that when given the opportunity to work remotely, employees are much happier and way more productive,” stated Kelsey. “Less time commuting and not having to work in toxic workplace environments has been a godsend for millions of disillusioned workers who suddenly have an improved work-life balance. The idea that most staff are sitting home and taking advantage of their companies is simply not true. Well maybe except for Mr. McCurdy, who according to all accounts and my professional opinion, definitely sounds like a little bitch.”

At press time, McCurdy was altering his Slack status to constantly appear online while he snuck into a matinee screening of Top Gun: Maverick for a second time.