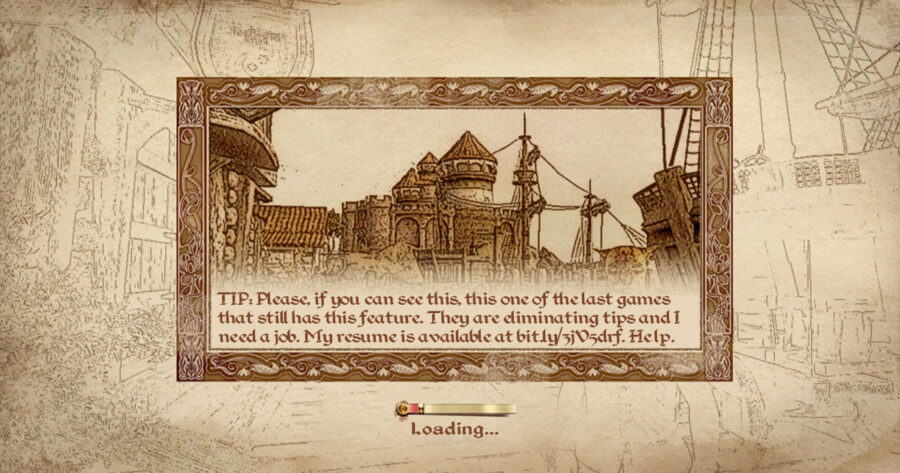 STANFORD, Calif. — According to new research, the “no load times” promise from next-gen consoles will eliminate the need for loading screen quick tips, spelling disaster for many writers and artists around the game industry.

“The Xbox Series X and PlayStation 5 will make video games much faster, but that comes at a cost,” explained industry analyst Brianna Rowe. “If there are no loading screens, that means there will be no place for players to read hundreds of gameplay tips while waiting for the next level. Unfortunately, these writers are going to have to pivot to writing weapon flavor text if they want to keep their jobs.”

Tip writers worldwide have entered panic mode as they brace for a wave of layoffs, with many researching how to file for unemployment. However, these writers have complained that the explanations offered on various government websites are far too long, and could benefit by boiling the key points down in a sentence or two.

“This is bullshit!” vented seasoned BioWare tip writer Marcus Devlin. “Without loading screens, how are people going to learn all the little nuances of gameplay? You think they’re just going to open a menu to find the tip they’re looking for instead of getting served one at random? Give me a break!”

Tip writers aren’t the only ones who will be affected, according to the report. The sea change is also expected to hit artists who draw cool background images and those who specialize in animating the word “loading” in the bottom corner of screens.

“What we provide is an essential service for gamers,” said Warframe loading screen artist Mara Parker. “Games are too fast nowadays. You need a break from the action every once in a while. I mean, be honest: you’re probably only reading this right now because you’re waiting for a Destiny 2 raid to load.”