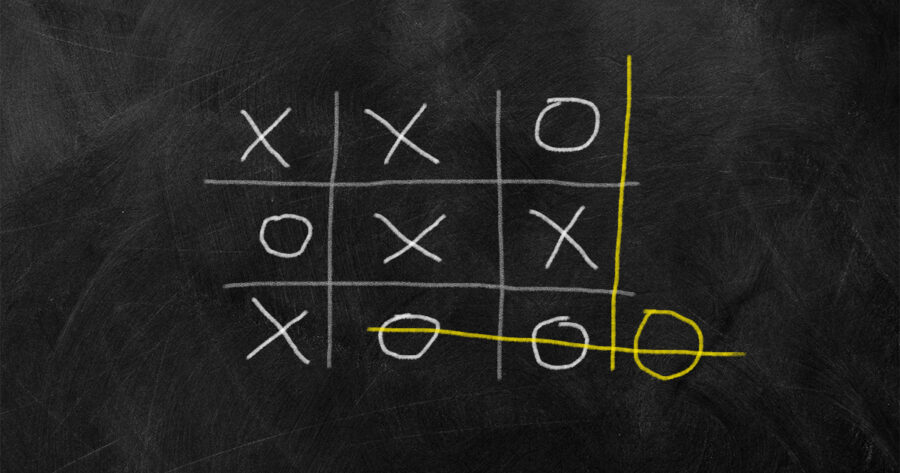 NEW YORK — The professional Tic-Tac-Toe circuit was stunned this weekend following the reveal that Matty ‘Tic-Tac’ Taylor used an illegal line addition to win the 2022 Triple Circle tournament, and may have cheated in previous competitions as well.

“This is just absolutely disgraceful,” said Chad ‘Cats Game’ Comstock, runner-up to this year’s Triple Circle and longtime rival to Taylor. “You have all of these class-act athletes here like Ex Oh Ex, Noughty Cross, Tic-Tac-Attack, Circle Smasher, Jeff, and then Tic-Tac-Taylor comes in and makes a mockery of this sport. In my 30 years of playing I’ve never seen anything like this.”

Taylor allegedly broke the rules by adding a single parallel line along the right boundary of the playing field, allowing him to add an extra ‘O’ to his existing pieces on the board. This extra line would be a direct violation of the Tic-Tac-Toe bylaws, specifically Chapter 12, §33.167, Rule 83: “No additional borders shall be added to the playing field outside of the already existing double vertical and double horizontal lines.”

“These rules are in place for a reason, and that reason is that we give our players a fair game and our audience a good show,” said Bob Bakerson, chairman of the board for the World TTT Federation. “Following this investigation, Tic-Tac-Taylor will have to stand trial in accordance with Tic-Tac-Toe law, and if found guilty his bones will be used for the 2023 Triple Circle, as is tradition.”

The Triple Circle, the longest-running Tic-Tac-Toe competition has been held since 1858, with this year’s prize exceeding $750,000 cash. Taylor has declined comment so far, but did put out a public statement regarding the allegations.

“I’ve just played Tic-Tac-Toe the way I was always taught to: from the heart. It’s not my fault I’m better than everyone else. The Tic-Tac-Toe speaks for itself,,” said Taylor in a heartfelt statement published yesterday. “I’ve never cheated a day in my life, and even if I did, you can kiss my ass and pry this money from my cold, dead, Tic-Tac-Toeing hands.”

Since entering the scene in 2014, Taylor has racked up multiple world championships and $400 million in prize money and sponsorships. It’s unknown at this time whether he will compete in this year’s world championship Tic-Tac-Tourney in Monaco for the Golden Cross and the $20 million cash prize.