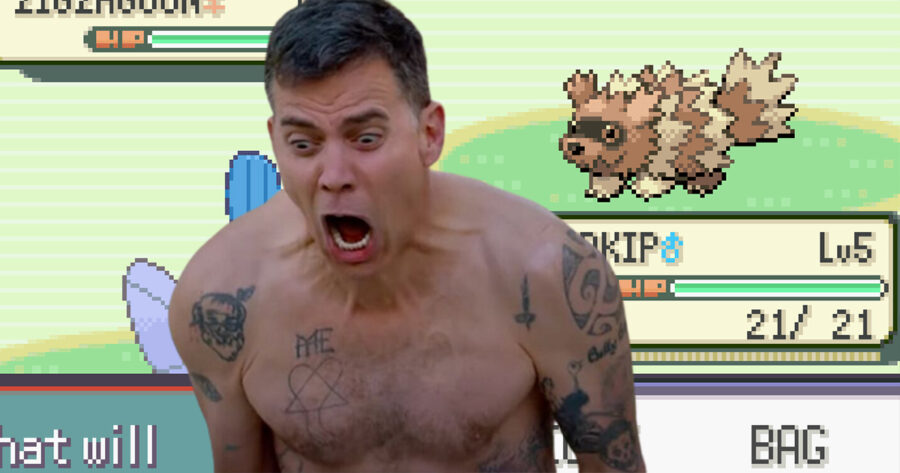 PORTLAND, Ore. — Leaked footage suggests a significant portion of Jackass 5 will depict Steve-O taking on his most brutal obstacle yet, a Pokémon Emerald Kaizo Nuzlocke.

“We’re not getting any younger, you know,” said Steve-O, recovering from a failed run that left him feeble and disoriented. “Our bodies can’t really keep up with the kind of stunts we used to do, but we can still do Jackass, right? We can still do some crazy stuff.”

Steve-O went on to explain the process of selecting this specific stunt for the next movie.

“We tried a couple things. Preston actually became a Super Mario Sunshine speedrunner for a while. But it wasn’t very funny, because he was too good at it. He was getting GBS — uh, Gelato Beach Skip — first try every time. Pontius wanted to try Sekiro blindfolded, but that was a disaster because everybody just kept tasing him. Eventually I came across this forum where this guy was talking about how he’d made a Pokémon Emerald romhack that was supposed to be super hard, right? Every gym leader has six Pokémon, every ’Mon’s got an expanded movepool and the levels are way higher and stuff,” Steve-O said, laughing maniacally. “The guys all thought I was out of my mind.”

Many of Steve-O’s fellow cast members expressed concern about the challenge he was taking on, but the footage shows that Johnny Knoxville found it amusing.

“We didn’t even tell Steve-O that Brawly has a Hariyama with Force Palm. No healing paralysis in battle, asshole!” Knoxville whispered before the stunt, struggling to hold in his signature cackle. “Norman’s Slaking literally has Shadow Ball. That’s not even a move Slaking’s supposed to have! It’s just there to mess you up if you try using Ghost types against him. I can’t wait. I absolutely can’t wait to see it.”

The leaked video later depicts Steve-O so engrossed in his battle with Team Aqua Leader, Archie, that he fails to notice the giant lobster that has been attached to his left testicle.