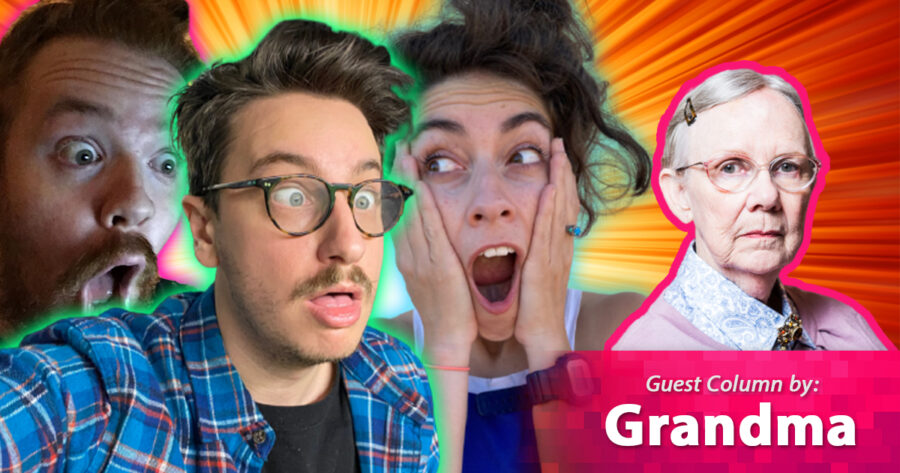 Listen, sonny. Those YouTube thumbnails you keep making with the outrageous facial expressions have got to stop. Yes they’re obnoxious, but that’s not the issue. Your old Gramgram has pulled her share of whippersnappernannigans. I know what it’s like to be young and full of piss and vinegar. But YouTube thumbnails are no joke. They can really put a run in your girdle if you don’t respect the process.

I used to make YouTube videos back in the 1950s. Of course back then we didn’t have computers. You had to shoot on your Max-O-Vision Lite-Weight 8mm camera and wait your turn to play it on the jukebox down at Pinky’s Hop Shop (this was before Pinky’s changed its name because of the McCarthy trials). But one thing we did have in my day was video thumbnails. If you wanted the teeny boppers to watch your top ten list of gangbusters polio vaccine formulas, you had to have a real humdinger of an image to sell it, otherwise they’d flip right past in favour of a jellied spam casserole recipe video. Some of the local kids would do anything to get that view, and they paid dearly for it. Remember your great aunt Erina? No, you don’t.

My sister Erina was the hottest Juketuber this side of Lake Mead. She had five followers, which was a lot in those days since they would literally follow her around. But it wasn’t enough. Erina wouldn’t be satisfied until the whole school was subscribed to her microfiche mailing list. She was always enlisting me to think of new ways to get people to click on her track switch: clever titles, novel content, showing some knee. Then one Sunday afternoon after a whole morning spent brainstorming, we took a break and went to the picture show. It was there that the inspiration that would be Erina’s doom struck. There at a matinee showing of Sailor Beware starring Jerry Lewis.

The way that man contorted his face was mesmerizing. He ran nonstop like a brand new Frigidaire. And the way he mesmerized the audience mesmerized Erina. She realized that mugging is the way to get people to glue their peepers to your picture. She insisted we leave at intermission so we could take a photograph to go with her “Squares React To Ferlinghetti” video. To this day, I still don’t know if those sailors succeeded in tricking that woman into kissing a man she just met. But Erina was no Jerry Lewis. She didn’t have the years of training and four failed marriages required to pull off a bug-eyed gawk safely. I tried to talk her out of it. I wish I had tried harder.

Her plan worked. Erina put on a pair of specs and a bow tie and made a flabbergastered face for the camera. She slapped that snapshot on the Ferlinghetti flick and it was an instant hit. All the hepcats dug it, so she made more muggy thumbnails. So many more. A massive grin on “Howdy Doody Cosplay Makeup Tutorial,” a silent scream of terror on “I Got Pregnant From A Marijuana Cigarette,” an overly-cocked eyebrow on “10 Creative Uses For Asbestos (Number 7 Is Delicious),” and on and on and on. But at each photo shoot I noticed Erina gave a little shudder as she struck the pose.

The other kids started to cop our style and soon everyone was stretching out their faces like taffy on the tilt-a-whirl for their thumbnails. But Erina had been doing it the longest, and she was the first to pay the price. She wanted to make the biggest mug anyone had ever seen, a funny face to make the Three Stooges hang up their wigs in shame and take up accounting. So for a video titled “The Top 15 Most Swoonable Songs About Statutory Rape,” she pulled out all the stops. I still remember the dazzlingly ludicrous sight of Erina in the viewfinder as I lifted the camera to my eye. She twisted her features into a hideous caricature of teenaged lust, she raised the back of her hand to her brow letting her fingers go so limp it was as though they had no bones, her eyes rolled one hundred and eighty degrees into her head, her mouth opened into a sigh in a shape I never knew a human mouth could achieve. I snapped the shutter, and in the light of the flash bulb, spacetime itself tore asunder, such was the absurd power of Erina’s horrific mugging. It was wild, daddi-o. And then to my shock, the man who started it all, Jerry Lewis appeared in the tear. The words he spoke seared into my memory for all time:

“Now shall you share in my curse, an ancient curse passed down since the time of the Zoroastrianists and set upon me by a vaudeville clown. And now like me shall you be tasked to endure the madness. Okay, bye-bye laaaaaydeeeeeeees!”

And with that, the tear sealed itself and Mr. Lewis returned to his Hell. Erina tumbled with her face to the ground. I ran to her, and when I turned her over I almost blew chunks. Her face twitched as it clung to the expression she thought would bring her to the height of her fame. I begged her to relax her muscles and speak to me, but all she could do was hold that pose and make grating sounds that were somehow guttural at the same time.

Erina has lived in the looney bin ever since, and she has never been able to unstick her face. She just wasn’t as strong as Lewis, Jim Carrey, Lucille Ball, and the other cursed among us. She is doomed with Thumbnail Face forever. And you kids will be too if you don’t heed this warning!

The video got two million views though.