Opinion: Bernie Should Have Stayed in the Primary in Case He Won Every Bonus Star 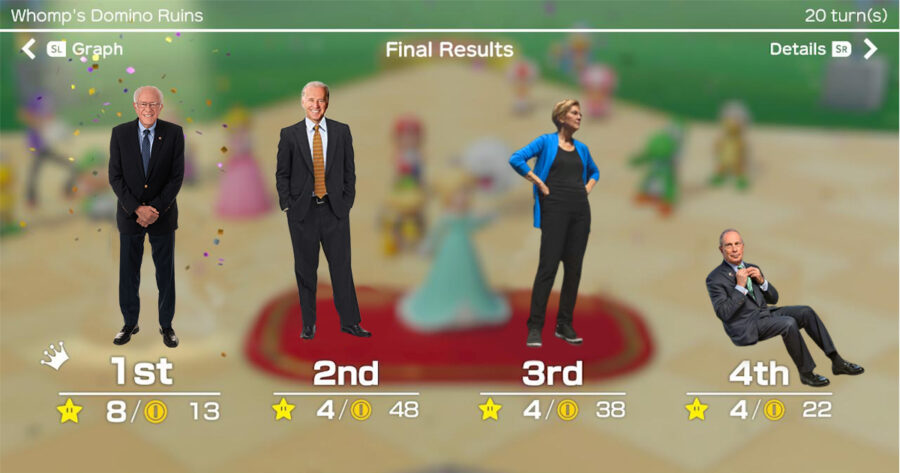 Bernie Sanders officially ended his bid for the White House today, ceding the Democratic nomination to former Vice President Joe Biden. Many have been calling for Sanders to drop out for weeks, claiming that there was no reasonable path to victory for him after Joe Biden’s strong Super Tuesday showing. These people were wrong, and Sanders has made a huge mistake by dropping out before the very end, when the Bonus Stars are handed out.

Though Sanders was behind in overall delegate count, he was strongly winning in three important categories. First of all, Bernie has been holding rallies, speaking to voters, and stepping on green question marks in working class neighborhoods across all 50 states, meaning he was a shoe-in to win the Happening Star. Given his strong debate performances and Biden’s struggles with communication, it is also highly likely that Sanders would have had the Minigame Star in the bag. Finally, Sanders’ campaign was funded not by billionaire donors or super PACs, but by over 5 million individual Americans contributing an average of just $18 each. Sanders raised over $300 million compared to Biden’s paltry $65 million, meaning that he would undoubtedly have been awarded the Coin Star.

The fact is, the only reason Joe Biden has been the frontrunner for the last few turns was because the other losing players practically handed him a Boo Bell to steal Sanders’ momentum for free, and now Biden has been playing terribly ever since the Last Five Turns event saw Bowser unleash a global pandemic on the board. Now is no time for Bernie to unplug his controller and cede the match by technicality.

It’s clear that establishment Democrats see Joe Biden as Luigi, and believe he can win by doing absolutely nothing. America needs someone who has been loudly and consistently on the right side of history for years, but shunned by the establishment in favor of safe centrist characters. America needs a Waluigi, and that Waluigi was Bernie Sanders.