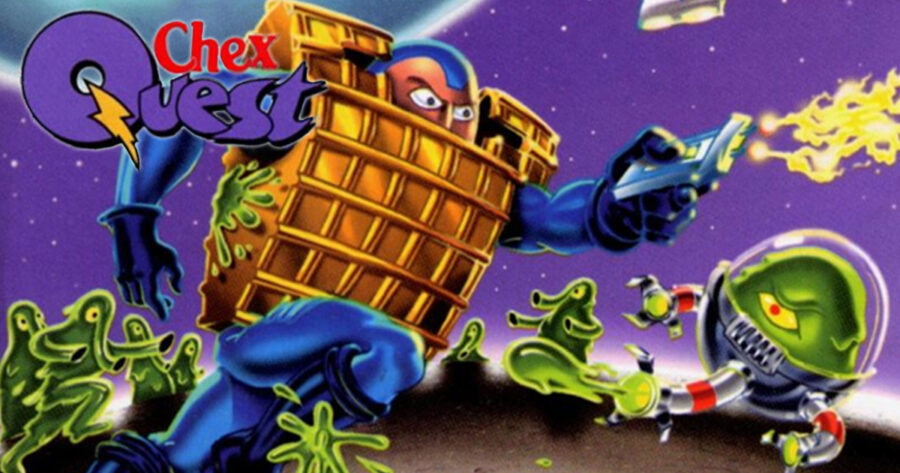 Everyone remembers their first. Whether it be your first live concert (the A-Teens), your first car (a dented Honda CR-V), or your first kiss (sorry Dillon), the inaugural “thing” tends to stick out in one’s mind. A lot of people my age have an enduring fondness for Pokemon, as it was very likely their first video game. Mine was Chex Quest — a first-person-shooter made for kids.

Well, kind of. It’s not as simple as a “shooter for kids,” though that is technically accurate in terms of the intended audience and style of gameplay. Chex Quest has a pseudo-mythical status for a lot of reasons. Despite its origins and concept, it managed to not only maintain an active fanbase since its debut, but become such a cult classic that it got a full remaster and multiple re-releases as recently as March 2022.

My personal interpretation of “mythical” has to do with the fact that I spent most of my life convinced I made this game up, and that my memories of it were either completely fabricated or totally inaccurate. Yet, it is very real. And it came back into my life after two decades in the strangest of ways.

Let me back up.

Chex Quest is a 1996 family-friendly, first-person-shooter PC game that was included, for free, in boxes of Chex cereal for a 6-week timeframe. It is also a straight-up Doom clone. Yes, that Doom, the game often cited with fueling the “violent video games” suburban panic of the ’90s. If this combination of competing ideas — corporate advertising targeted at kids mixed with the most notorious game of the decade — feels unhinged to you, it’s because it is.

Why the hell did this get made?

Simply speaking, money. The entire goal of Chex Quest  was to “reinvigorate” the Chex brand, which is marketing speak for “sell more stuff.” The promotional agency tasked with this decided that putting 6 million copies of a free CD-ROM into cereal boxes would show consumers that the company was cool and hip with the youth, and therefore bolster sales. It actually worked, and ’90s kids everywhere got their hands on this cult-classic in the making.

The game’s development was unsurprisingly weird. Since the budget was low (half a million) and the turnaround was tight (half a year), the team opted to seek out an existing game engine, pay pretty much nothing to license it, and tweak it for their purposes. Fucking insanely, they chose Id Software’s Doom, the revolutionary and controversial first-person-shooter that was most well-known for its graphic violence and Satanic imagery, and would later be stained by its association with the Columbine shooting.

Chex Quest is a re-skin of Doom with new music and textures; the gameplay and levels are identical. Guns were replaced with remote-looking things, blood with slime, and bullets with vegetables. To put it into perspective, this would be like taking Resident Evil 7 and turning Ethan Winters into a Kinder Egg who kills the Molded with chocolate.

The modding of the engine was done by a literal 17-year-old programmer in the evenings (you know, after he was done with school). The full 6 million release copies were burned from a single demo disc–before it was even bug-tested. It all sounds like some schoolyard rumor that was warped by a game of telephone, but it’s real.

I was first introduced to Chex Quest when I was in kindergarten. The boys responsible for showing it to me were Brad and Jason, the sons of my parents’ closest friends. Brad and Jason were 3 and 5 years older than me, but they never made me feel like a tag-along or an annoyance–I was like a little sister who came to visit a few times a year.

The two of them would take turns playing Chex Quest on their family PC while I sat either next to or on top of them like a horrible monkey child and watched. It was the first real video game I had ever seen, save for a few “educational” point-and-clicks and dress-up games. I was mesmerized. It was like entering one of the Windows 95 pipe screensavers — totally 3D, but you were in control.

Most importantly, you, a giant piece of Chex cereal, could fight aliens. Sick.

I’m sure we only played it a handful of times. We all grew up. I became convinced that I must have imagined Chex Quest — it was way too weird to actually exist. I didn’t think about it much at all after childhood.

That is, until the autumn of 2017, when Jason was killed by a drunk driver. His death was devastating and I felt deeply alone in the aftermath, as I had no mutual friends with whom to remember him. Only my family and his.

A few months after Jason’s passing, his mother asked for friends to share fond memories of him. I had plenty: trips to the lake, bad sumo-wrestling home videos that in hindsight were probably super racist. I agonized over what to tell her, what story would be so perfect that it would alleviate her grief.

Suddenly, I knew — I had to find out what that fucking cereal game was, if it was even real.

It took only moments of Googling to discover that holy shit, not only was this game legit, but it had a serious following. I called Jason’s mother and managed to explain, through laughter and tears, that Jason showed me my first video game ever, uh, where you’re a piece of cereal killing aliens with vegetables? She was bemused and a little perplexed. But I could tell she was smiling.

I am well aware of how nostalgia goggles work, especially on my generation, but some part of me is truly thankful for this whack-ass little game and the spot it holds in my heart. It’s a perfect reflection of how the innocuous things – the ones you don’t expect to have any lasting meaning — are often the things that stick with you. A backwards marketing ploy that became a legend among kids that became a core memory of a lost friend.

I genuinely do not know who thought it was appropriate to take perhaps the most graphic game of the era and redo it for children, or how the fuck they wound up succeeding. But at the end of the day, part of that utter strangeness is what makes Chex Quest so fascinating — it shouldn’t exist. And I can’t imagine life without it.