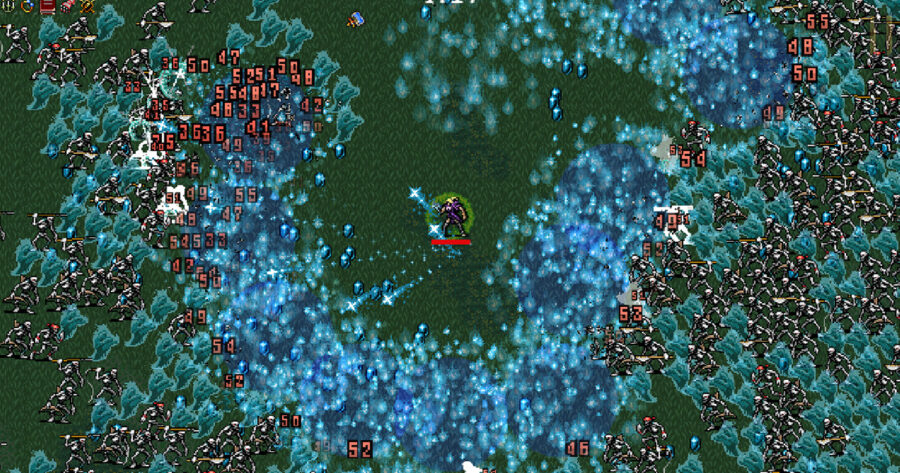 Elden Ring. Rogue Legacy 2. Shredder’s Revenge. These are just some of the astoundingly fun games I’ve involuntarily put on the backlog this year in order to keep playing Vampire Survivors every time it updates. And now, I’m hooked on 20 Minutes Till Dawn too, the first of hopefully many obvious spiritual successors in a direct but respectable lineage. Think Slay the Spire and Monster Train.

The problem is, I don’t really know what to call this type of game, and we really need to figure out a snappy title for my new favorite genre before it gets saddled with something awful like Metroidvania. It’s like that old expression, “One is an indie gem, two is a genre.” Or whatever. Now that these games have their PUBG and Fortnite, we gotta name these fuckers. We’ll do it right here, right now. Buckle up.

First of all, If you haven’t checked it out already, go buy Vampire Survivors. I have trouble sticking with games and I’ve put 40 hours into it with no signs of slowing down. And it costs three bucks. It’s sort of an idle, survival, roguelike, Musou, action game. It’s as glorious as that description is ungainly. However, it’s a start. That’ll be the name to beat.

Ooph. I don’t like that at all. It makes it sound too complicated. What it boils down to is actually quite simple: Kill things, gather the XP they drop, use it to upgrade your weapons and abilities, which all do their thing automatically. You steer, the game operates the weapons. It’s a glorious loop of twitch reflexes (in the form of avoiding an ever growing army of undead enemies) and on-the-fly character building. If that weren’t enough, there’s new weapons and characters added more often than I can keep up with. My first thought when I played Vampire Survivors was that it’s like Castlevania meets Geometry Wars. Which is kind of true! But it’s also sort of like Dead Cells meets Cookie Clicker. I don’t fucking know man, it’s like a lot of things.

But that’s the beauty of Vampire Survivors. It’s a big chaotic mess, with a screen full of enemies, weapons and evolutions to keep track of, and unlockable content stored behind often esoteric achievements. But the simplicity of your impact on the swirling madness makes it strangely calming. A free for all that is way more blissful than this mess of a genre label I’ve connected implies.

Okay let’s try a different approach. I recently grabbed 20 Minutes Till Dawn, the also-three-dollar heir apparent to Vampire Survivors. Playing this one, it’s abundantly clear that Vampire Survivors is to this genre what Dark Souls was to Soulslikes.

Not great, is it? VampireLikes and SurvivorLikes both feel wrong too if you ask me (the latter sounds like how you’d classify Love Island). VSLikes? No, “Vs” is too loaded for gaming. We need a fucking snappy title, I’m telling you!

If I were cynical, I could focus on the fact that 20 Minutes Till Dawn has more than a little in common with one of the year’s most talked about indie games, but that would be missing the point by a mile. Vampire Survivors is THAT FUN and we need to celebrate the games that take influence from and also build on top of their inspirations.

I’d rather celebrate the innovations 20 Minutes brings to the burgeoning genre. You pull the trigger to shoot! You play for 20 minutes and not 30! Vampire Survivor’s idle game influences have been stripped away and in its place is a run-and-gun shooter more akin to Enter the Gungeon in a big empty room. This is very relevant, as it says to me that the idle nature of Vampire Survivors aren’t an obligatory part of the genre we’re naming here today.

Okay, let me throw another one out here. I think this one covers it.

Damn, that one sucks too, huh? Maybe an acronym of that? S.B.A.R. Oh, I know, we’ll call them SBAR’s, like how some people started pronouncing “SNES,” like it was a word one day.

No, that really sucks. It sounds like a standardized test you failed in high school.

On top of not being very snappy (we’ll get there, I swear), I just realized I’ve not talked much about the most important thing these games share; the three dollar price point. I’m happy to pay a reasonable amount for a good game, but in the era of $70 triple A releases, imagine if this could be the Arizona Tea or Costco Hot Dog for gamers. I think we deserve it. I think some elements of these games should be up for interpretation, (length of session, active/inactive shooting), and some we shouldn’t budge on. Let’s not budge on this one. No better way to do that than include it in the title. Oh, I know!

Wait, nope, that’s just slang for cheap booze that was lodged in my head somewhere. We’re getting warmer though.

Alright, what about this? These three dollar games are hectic, right? Their nature is to grow more chaotic by the minute and your only hope for survival is if you are able to level up your character in a way that your firepower keeps up to the absurd level of the enemies you are facing. It’s madness, sheer pandemonium. It’s a free-for-all. A brilliantly conducted free-for-all, but a free-for-all nonetheless. These wonderful games are three dollar free-for-alls.

Ohhh shit, I kinda like it! Three For Alls!

Folks, if there’s a better name for it than this, throw it in the comments. Otherwise in two weeks we will officially be referencing Vampire Survivors, 20 Minutes Till Dawn, and all subsequent relevant entries into the genre as Three For Alls.