The Wilhelm Scream Is Out, the Akira Bike Slide Is In

Another film tradition defeated by the sheer coolness of anime 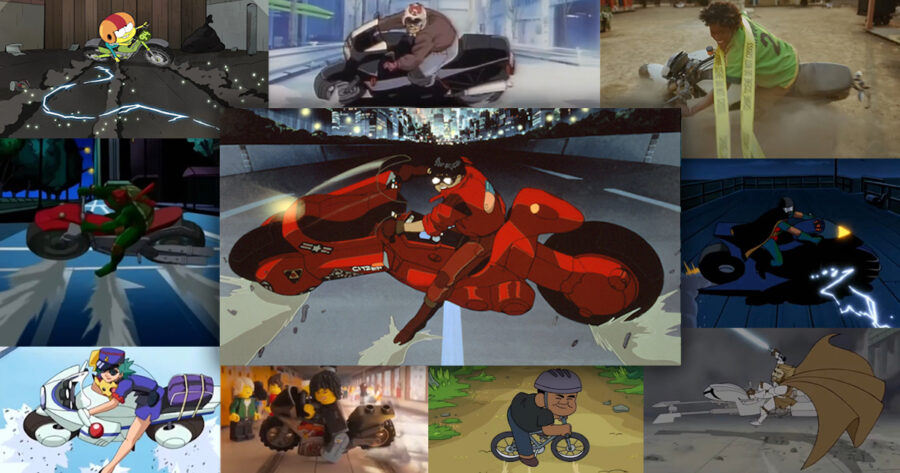 In 1951, some unspectacular guy in an unspectacular movie let out a shrill-ass yelp and generations of nerds decided to turn it into everyone’s problem. This became known as the notorious Wilhelm Scream and it’s been a bad penny ever since. It’s a wink and a nod that film dorks love to point at and feel like they’ve caught something everyone else didn’t. But everyone did get it. At this stage in cinematic history, it’s impossible to not get. They just don’t care like the normal people they are. It’s like pointing out that a Wendy’s beef patty is square, or the hidden Mickeys at Disneyland. That’s awesome man, very cool. Moving on.

Now, is it the worst thing in the world? Absolutely not. Am I hamming it up to make a point? You bet your ass. However, no matter how indifferent, ineffectual and passive the Wilhelm scream has become, in recent years we’ve been introduced to its way cooler cousin. A cousin that rides a motorcycle:

With the recent homage made to the famous scene in Jordan Peele’s blockbuster Nope, attention around the bike slide has resurged. Fans have been reminiscing about their favorite instances of the iconic image in everything from Teenage Mutant Ninja Turtles to No More Heroes 3. But with a litany of these references, shouldn’t it be a tired bit? Not a fuckin’ chance, bucko.

What makes the Akira bike slide so special is that it isn’t in abundance; It’s precisely the inverse of what’s made the Wilhelm scream so bland. It has the good fortune of being doled out in moderation, as if there’s a maximum annual quota to be met. What’s even better is that it’s not limited to a niche. Akira’s influence is far more widespread than most likely even realize (Peele himself has cited it as one of his favorite films on several occasions, even being in talks at one time to direct a western adaptation). That’s just it, too. When you see the bike slide, it not only provides an insight to the responsible party’s taste, but if you also share a love of Katsuhiro Ôtomo’s most celebrated work — it feels special.

It’s also just cool as hell. If some guy does a goofy scream in a movie and you don’t know what it’s a reference to, it just sounds like a bad vocal effect. But if you’ve never been forced by your weeb friend to watch Akira, and you see Kanada’s iconic slide recreated somewhere else, you’re like, “Damn! That was a dope move!”

Nobody is sneaking in the Wilhelm scream because Raoul Walsh’s Distant Drums had a profound impact on them. It’s because it’s something they think they should do, an obligation of the auteur. It’s the difference between an uncomfortable shoulder jab from some geek going “Didja see? Didya get it?” and an old friend throwing you a dap.

In conclusion, referencing media in other media is always a dicey game. Subtlety, nuance, and thematic relevance are always at play. But one thing is for sure, and that’s that a character doing a sick-ass hockey stop on a chopper escaping some bad guys will always rock and never get old. It will in no way, shape, or form be lost to time and become a fridge magnet of cinema. Right?