The Marvel Cinematic Universe Is in Its Flop Era. But Then Again, So Is the Planet 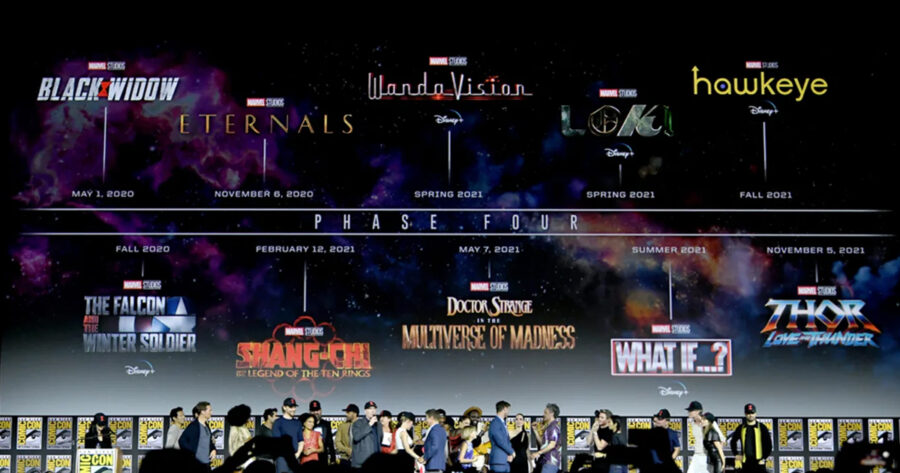 Welp, Thor: Love and Thunder is the latest installment of the Marvel Cinematic Universe to be thoroughly, whelmingly, mid. But that shouldn’t be too much of a surprise, given that the MCU is now firmly in its Phase 4 “flop era” thanks to middling films like Eternals and Black Widow.

But hey, who can blame Kevin Feige? Our own universe is in a steady decline, so maybe it makes sense that Marvel’s is too.

With 6 films and — Jesus Christ — 7 Disney+ shows released over the last 18 months, Phase 4 of the Marvel Cinematic Universe has felt both lethargic and overwhelming. We’ve gotten 50 hours of content that’s mostly amounted to more homework and less clarity about what the hell this is all supposed to be building toward. (I think maybe the Skrulls are enlisting Julia Louis-Dreyfus and Harry Styles to stop the Time Department from blipping the multiverse? Or whatever.)

Everyone seems to be taking note of this phase’s disjointed aimlessness — from IGN to Collider to Forbes (which I thought was supposed to be a website about the stock market or something). And although the Hollywood-owned Rotten Tomatoes has gradually seen its average Tomatometer scores creep up over the years, the mean score for the MCU’s Phase 4 movies is currently 75% — the lowest of any phase yet.

With the release of Thor: Love and Thunder, the latest cycle of mocking a new MCU entry’s failures (while it nevertheless rakes in a gazillion dollars) is in full swing. And a lot of the most prominent criticisms reflect the broader problems we keep seeing in the MCU’s Phase 4 movies. Spoilers below!

Thor: Love and Thunder is just another jester in the clown square that is Phase 4 of the MCU. But unlike everyone else online, I’ve decided that I’m not mad about it. Why? Because the MCU sucking ass now is just a symptom of a more insidious disease: which is that life as a whole sucks ass now.

Phase 4 of the MCU Is Mediocre, But So Is Life

Think about it: the MCU peaked with Avengers: Endgame. Endgame came out in 2019, and life was simply better then! (Okay, life was actually really shitty in 2019. But we were living in blissful ignorance that it was about to get several magnitudes shittier in the Spring of 2020.)

Cut to the pandemic. Black Widow, a movie that was already coming out way too late to justify its own existence, got significantly delayed. So did a bunch of other shit, creating the release date pile-up that has undoubtedly contributed to growing MCU fatigue. The projects that hadn’t finished production shifted to more COVID-cautious greenscreen-heavy shoots, exacerbating the lifeless, washed-out visuals that have often plagued the MCU. All the while, the rest of the moviegoing industry has been hanging on by a thread, meaning we get fewer palate cleansers between our quarterly servings of Feigeslop. Feigeslop has its place! But it is best consumed as part of a balanced cinematic diet — which is simply no longer possible now that the world sucks big ass.

Mind you, these are just the ways that the world sucking ass has directly affected the quality of the MCU. We’ve barely considered some of the more tangential reverberations of universal ass-suckery. It could be that our collective despair in the midst of a crumbling world order might adversely affect our ability to enjoy escapist content—particularly when that content often intimates that you should just lay low and trust the global elite (uh, I mean, Ant-Man) to solve your problems for you.

Oh, also I guess it’s worth remembering that we’re all 14 years older than we were when Iron Man came out and these movies are for children.

So, sure, the MCU has fallen off. But so has everything. Therefore, until Disney finds a way to acquire existence itself, the Marvel Cinematic Universe will remain but a pawn in the grander scheme of our actual universe. Lest we forget, that universe sucks ass — and it’s not even America’s ass.