The Best Time to Bring Back Guitar Hero Was During Quarantine. The Second Best Time Is Right Now 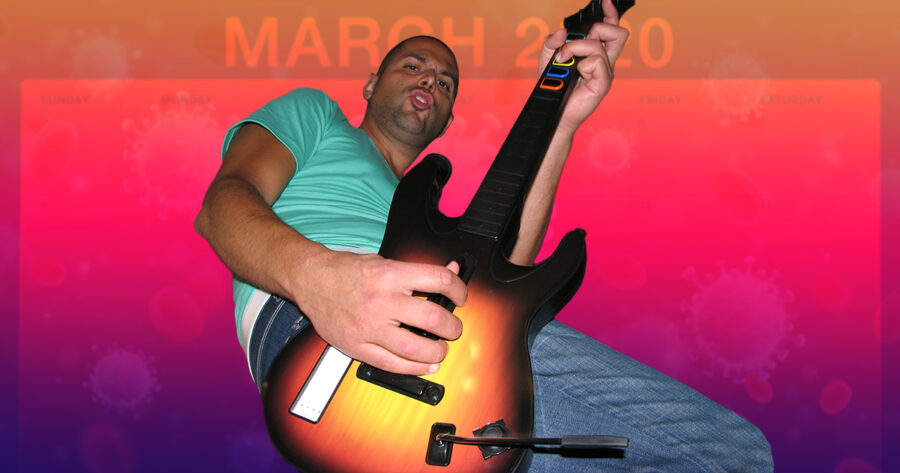 Look, I don’t pretend I know a whole lot about consumer trends or finance or even video games. But I deeply hold one conviction, which I know to be true based on nothing more than gut instinct and general vibes: if Microsoft made their newly-acquired keyboard-monkeys at Activision Blizzard create a new Guitar Hero game, it would make a shit-ton of money.

How do I know this? Because I’m a consumer, I have access to a bank account with several thousand dollars in it [editor’s note: no need to brag], and I’ve become increasingly desperate to play Guitar Hero again. In fact, I even went as far as to download the open-source, legally-questionable Clone Hero to scratch the itch — which also involved buying a Guitar Hero controller for like 80 bucks and navigating a labyrinth of perils to make it work on my 13-inch 2015 MacBook Pro with Retina Display.

And people: this shit is still really fun. I’ve never even been very good at Guitar Hero, and that doesn’t matter. I’ve picked up right where I left off — spamming the power chords of “When You Were Young,” frantically trying to keep up with the iconic solo of “Free Bird,” and running “Slow Ride” like 23 times in a row so I can say I got 100% on Expert on at least one song. More than any other game I’ve ever played, it emulates the profound sense of satisfaction that comes from meticulously developing a real skill, without, y’know, the boringness of actually doing that.

Still, this indie recreation is no substitute for a real honest-to-God Guitar Hero game. I find myself yearning for the strung-together storyline and lowest-common-denominator rock-n’-roll humor of Career Mode. I miss working my way through a curated selection of songs with a gradual difficulty curve. I want to easily compete and collaborate with my friends for hours on end, ripping on the player character’s uncanny valley lip-syncing all the while.

And most importantly, I gotta be able to buy the game and have it immediately work on my TV, instead of spending hours on Reddit trying to understand why macOS Big Sur won’t let me use Xbox controller drivers and determining whether downgrading to macOS Catalina will reverse the polarity of my computer’s CPU and blow up every apartment building in Greenpoint. No video game should ever require the player to spend even a second on Reddit. In fact, it should be considered a crime to do so.

I love this genre, but if you give me 17 of anything, I’m not gonna ask for an 18th helping anytime soon.

Now, even though it’s obvious to me that Guitar Hero coming back would revolutionize the gaming industry, I understand there might be some skepticism among the number-crunchers at Xbox whose “careers” “depend” upon “not losing millions of dollars by going out on a limb to revive a franchise that died a decade ago.” Why, they might ask, would bringing back Guitar Hero work when rhythm games crashed and burned so spectacularly in the early 2010s?

Since 2010, however, there has only been one Guitar Hero game released — Guitar Hero Live in 2015 — and good luck finding it at an affordable price. Meanwhile, shittier rhythm games have picked up steam on mobile and in indie spaces. This is on top of an existing landscape of obsessive nostalgia for the halcyon days of the late 2000s. We’ve already seen deeply unnecessary reboots of IP like Gossip Girl, iCarly, and the Obama administration in the last year; clearly, the public is ready to Make 2022 2009 Again.

By the way, this isn’t just a pipe dream: shortly after the ActivisionBlizzard acquisition, Xbox CEO Phil Spencer name-dropped Guitar Hero in a list of properties that he was excited about potentially bringing back to life. And I don’t want to live in a world where any given CEO’s fleeting whims can’t be immediately made a reality.

Now, I’ll admit the timing isn’t completely ideal to reboot Guitar Hero. Because I think it’s obvious that the best time to do it would have been, I don’t know, say, March 12th, 2020. Think about it: a game that aims to recreate the joy of live music from the comfort of your living room? You’re telling me you wouldn’t rather have been playing that than fuckin’ Critter Town: New Awakening or Exercise Circle World or whatever the hell we were doing during peak quarantine? Guitar Hero deserved an Animal Crossing: New Horizons level of quarantine madness fueled attention.

But nevertheless: with the 12-year-olds of the aughts becoming the disposable-income-havers of today, it seems pretty clear to me that the Guitar Hero renaissance could be upon us. Hell, you could probably call the game Guitar Hero: Renaissance. And even if it’s destined to flop among normal people, I want it really bad, so Microsoft should just do it anyway. Isn’t that what video game blogging is all about?