Since Video Game Shit is Allowed in NASCAR Now, Here’s 5 Games We’d Like to See Crossover Next 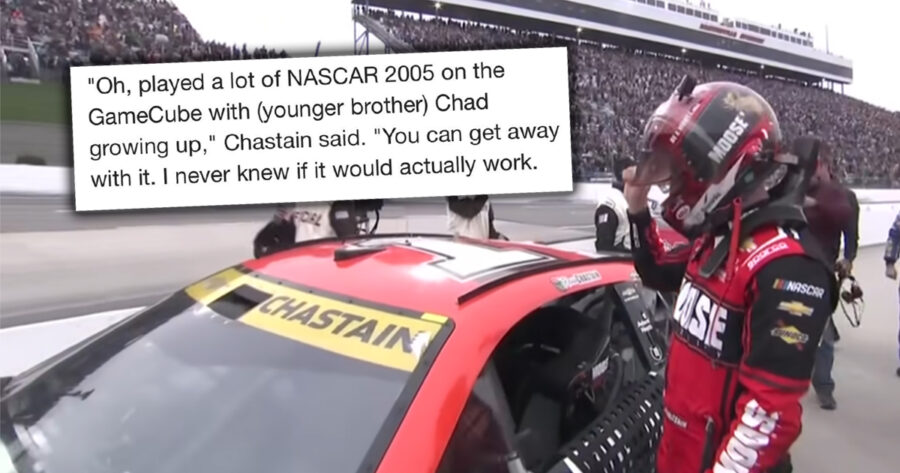 Last weekend at the Xfinity 500 at Martinsville Speedway, NASCAR racer Ross Chastain went full speed along the wall around turn three, passing several cars in the final moments and barely finishing in a high enough place to join Joey Logano, Christopher Bell and Chase Elliott as the four drivers competing for the 2022 Cup Series title. Now, I’m not entirely sure what that means, but what I do know is the guy said it was straight up a maneuver he used to do in video games as a child:

“Played a lot of NASCAR 05 on the GameCube with [brother] Chad growing up and you can get away with it… and I never knew if it would actually work.”

The obvious takeaway here is gamers are taking over. Everyone knows that. But what’s more interesting to think about is what long gestating strat might today’s gamers-turned-NASCAR-drivers be thinking of employing next? Here’s five video games that we hope follow in NASCAR 2005’s footsteps by influencing the professional racing industry.

This goes without saying and it’s honestly fucked up that no one’s ever taken any of the great mechanics of the beloved racing franchise and incorporated them into professional racing before. There’s so much room in those cars, why can’t they have a turtle tank riding shotgun and they can fire those bad boys out at each other? It sure would liven up those boring ass caution flag laps, I tell you that much.

Now, I’m not an idiot. I know the difference between real life and video games. I know that whipping a turtle against the passenger side door of a moving car isn’t going to effect it very much, let alone spin it the fuck out. I know that. But just imagine if someone landed a snapping turtle in someone’s lap or something? It could really be a Hail Mary that would spice up the ends of races.

I can hear it now:

“Kyle Busch was in really good shape until Denny Hamlin landed a snapping turtle on his penis. What a finish! Busch looks pretty riled up out there, and I would be too, race fans!”

This one probably goes without saying too. Where are we at with the homing missiles and everything else? I’m not sure if NASCAR gets good television ratings or not but what I can tell you is that if you start letting in monster trucks and taxi cabs with missiles and machine guns start running in the Daytona 500, well then mister, you’re going to have some really good television on your hands. That’s what I think.

Also, can we get some grizzled and gnarly characters into the sport already? No offense to the milky crew that drives NASCAR currently, you guys are great, but just think of how far one or two homicidal maniacs or ghosts or whatever the hell Axel was would go.  Could really get some new fans into the sport that way. Don’t believe me? Look at the numbers that Dahmer show did on Netflix.

Also, they should do NASCAR up on rooftops and shit!

I don’t think I need to say anything here.

Back in the day, my roommate Matt used to play this game a lot and he unlocked a mode where if you honked your horn it would shoot a fucking mortar out of your car and cause a bunch of destruction. It was on the PlayStation 2 and I remember being so impressed at how real and detailed the huge crashes were that you could create.

I think, and bear with me here, that it would be pretty compelling if they rigged up NASCARs to shoot mortars out of them when they honked their horns at each other in the real life thing. Nothing too crazy. Like one per race. And also you can’t use your horn anymore after you’ve deployed your mortar, so that would be something for the drivers to consider. Would love to see this feature safely implemented into the sport.

Now I’m not all the way sure on the execution of this one, but remember that trick in Halo 2 where if you did a melee you could then hit reload real quick and cancel the melee animation, then quickly fire for a quick 1-2 melee/fire combination? I think it would be awesome if that were in NASCAR somehow. Also, big ass Warthogs with armed soldiers. Fuck yeah. Get a guy on the gauss cannon. What about Rocket Race?