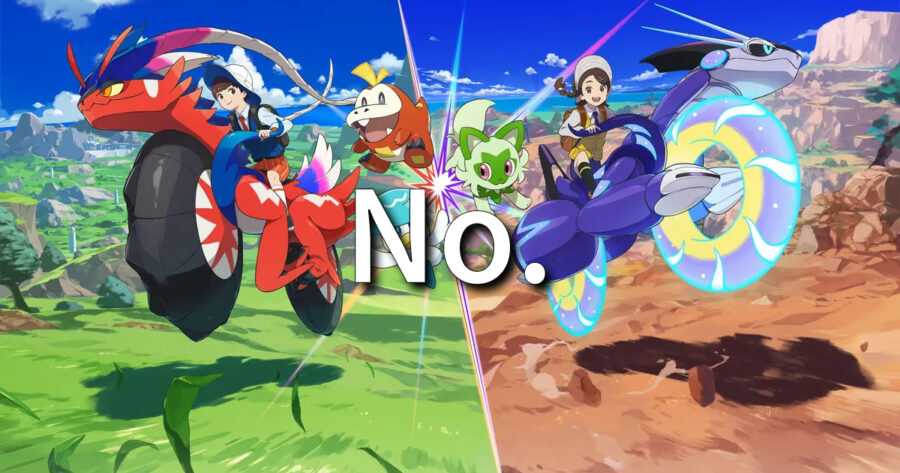 Pokémon fans make a lot of requests, but one has always stood above the others: we want a truly great Pokémon game on a home console. With their latest pair of games for the Nintendo Switch, Pokémon Scarlet and Violet, Game Freak and Nintendo have finally put an end to 25 years of speculation with a sharp, definitive answer: “no.”

You already knew the answer, of course. It’s been plain to see for a long time now. Things don’t just come to this, all of a sudden. That’s not how relationships work. No, the signs were always there, if you’d wanted to see them. If Game Freak and Nintendo were going to deliver for you, if they were going to finally show up for you after all these years with a really good Pokémon roleplaying game for a home system — well, they would have done it by now.

Think back: the first Pokémon games came out in 1996. That’s the same year as the N64. “Great,” you probably thought. “Soon they will make a badass Pokémon game that I can play on my television!” Can you believe you were ever so naïve?

Instead, here’s what you got. Seriously, here’s a complete list of Pokémon console games:

Now, you may be thinking: “I like some of those games!” That’s beautiful. You’ve found sources of comfort in these decades. We don’t want to take that away from you. But be honest with yourself, kid: everything you see here is a half measure. It’s all remakes, spin-offs, empty gestures that lead to no meaningful change. Some of them barely count as Pokémon games. I even made three of them up. Did you even notice? Not that it matters.

Game Freak may not have put their feelings into words, but if Pokémon Scarlet and Violet say anything, what they say is “No,” as in the phrase, “No, we are never going to make the Pokémon game you want us to make. Never in a million years. Fuck off.”

It’s what they had to say, because I guess their actions haven’t spoken loud enough for you.

There have been a total of 122 Pokémon games, 25 seasons of television and 40 billion trading cards printed over the past 25 years. Pokémon has become the most valuable entertainment brand ever. And not once, in all that time, have they made a genuine, all-out effort to give you what you want. Yeah — they’ve been sending you this message for a long time.

But now, it’s official: they want out. They’re done.

It’s an opportunity, really. Game Freak is setting you free. They have finally made their intentions clear to you by producing Pokémon Scarlet and Violet, a brand-new video game experience that somehow: 1) Looks like shit, 2) Plays like shit, and 3) Literally makes your Nintendo Switch melt down. You can run Skyrim on Nintendo Switch, but a blurry Gastly in a field is too much? No. No, what happened here is no accident. It’s a line in the sand.

Game Freak didn’t deliver what we wanted, but they delivered what we needed: closure.