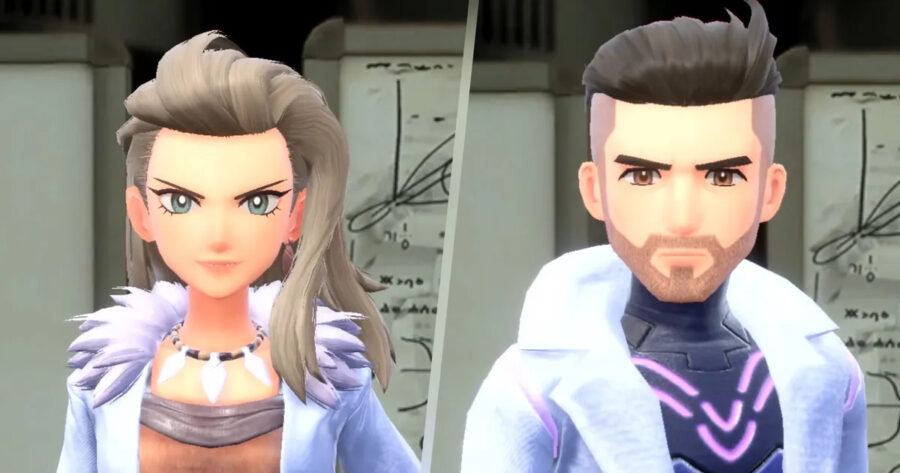 A trailer for Pokémon Scarlet and Pokémon Violet dropped this morning, sharing new details about the highly anticipated titles. The games are already making headlines for a variety of reasons, from their November 18 release date to The Pokémon Company confirming they will feature full 4-player co-op for the first time in the series history. But that’s not the biggest news.

The new trailer confirms something more important: The professors are hot this time.

That’s right, sickos. Say goodbye to the days of crusty old mentors like Professor Oak or absolute nerds like Professor Elm. The latest installment in the series introduces not one, but two bonafide fuck machines.

First, there’s Professor Turo, who looks like a cartoon adaptation of a Sigma Chad meme come to life. Sporting some gruff five-o-clock shadow and a side-cut hairdo, he’s your prototypical hip tech bro who loves designer IPAs and finance apps. Professor Sada, on the other hand, has more of an Earthy Goddess vibe going on with her puka (or Poké) shell necklace and windswept hair.

"Yeah we saw you from across the Pokecenter and we really like your vibes, can we buy you a Moomoo milk?" pic.twitter.com/a3xZYWsjd2

a lot of people will be celebrating the start of pride month by asking both Pokémon professors to step on them https://t.co/ZEUF1L37TW

People always complain that the Pokémon games are too scared to add anything new to the formula, instead opting to just barely update the graphics with each new game and keeping the same general core gameplay since the 1990s. But you can’t really say that’s true for Pokémon Violet and Scarlet because this one has hot professors.

In general, Pokémon Violet and Scarlet seem to be swinging for the simps this time. Even the games’ new legendaries, two lizards with wheels in their chest, are kind of hot. Considering that we haven’t really had a true smokeshow legendary since Mewtwo, it’s a big day for people who actively think about getting railed by cartoons. And don’t even think about making us Google-Image-search “Gardevoir.”

The Pokémon Company knows what it’s doing here. Anytime a new Pokémon trailer drops, there’s an immediate meme cycle as players turn every detail into a social joke. Violet and Scarlet are almost explicitly playing into that trope this time. Just look at Lechonk, a new pig Pokémon with a name designed for fans to slop up like mud.

Maybe that’s the ultimate reason why Pokémon continues to stay relevant so many years later, even with a general decline in quality. The Pokémon Company has tapped into the power of the meme generation, the most powerful marketing tool of all. It doesn’t matter if the latest trailer for the game virtually shows nothing other than vague landscapes and out-of-context gameplay. But you will remember that it has hot professors and you will buy it.