‘Pokémon Legends: Arceus’ Is Really About The Monsters That Don’t Fit In Your Pocket: Humans 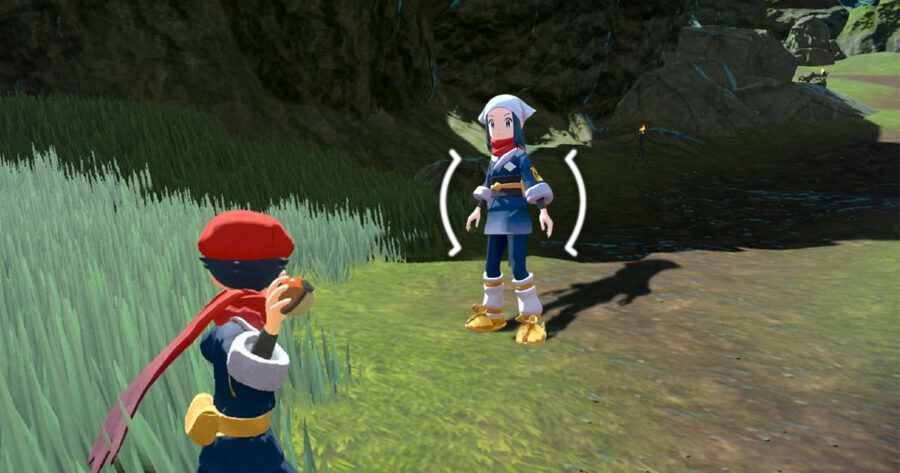 Here at Minus World, we love talking about Pokémon Legends: Arceus. At the time of this writing, forty percent of articles on the site are dedicated to the game. Once this is published, that number will jump to fifty percent, and the trend will continue on like that as both the number of articles on this game and the number of Minus World articles in general both approach infinity.

Just like the game’s intrepid researcher protagonist, every time we publish a new article on Arceus, we come to understand it more deeply: observing the game’s eating habits, charting its migratory patterns, noting the color of the horizontal stripes adorning its bushy tail. Soon, you’re going to need a whole separate pasture just to fit all of our thoughts about this goddamn game. (Step aside, the 432 Psyducks I caught last night!)

But enough talk about the Pokémon themselves, because this article is actually all about the true monsters in this game that DON’T fit in your pocket — that’s right, I’m talking about HUMAN BEINGS.

I’m sorry, were you not prepared to read a take that staggering? Apologies if I just threw off your whole weekend, you might need to clear your calendar just to chew on this for the appropriate amount of time. If I’m getting too Galaxy Brain for you, it’s only because that’s how seriously I take my responsibilities as a four-star member of Team Galaxy. (I just need to catch 572 more Psyducks to nab that fifth star!)

Let’s back up a little. When parents in the ’90s first heard about the Pocket Monsters craze — yeah, that’s right, this article jumps backwards in time just like the game — they all assumed the exact same thing: that it was pronounced “Pokey-Man.” At the time, we chose to mock our parents and condescendingly mimic them for the decades that followed. But at its core, the “Pokey-Man”’ phenomenon is a clear indicator that human beings expect themselves to be at the center of every narrative.

How can we blame our naïve parents? What good is a story anyway if it’s not about a guy named Pokey-Man or Digi-Man or Mystical Ninja Goey-Man? It’s only human nature to seek out reflections of ourselves in the stories we tell. Arceus provides a reflection of mankind with brilliant clarity; no matter what you name your player character, it’s clear that they are meant to represent the full embodiment of Pokey-Man himself. (Of course, this also applies if you chose a female player character, but this paragraph would immediately fall apart if I tried to make it gender neutral. I’m talking about mankind, here, like I’m an astronaut on the Moon — that’s just how important this all is.)

I never said it was a flattering reflection, though, just a clear one — the headline here is still that the people are the real monsters in this game. Nearly every Pokémon game begins with a professor warning you not to wander into the tall grass where monsters are hiding; in this game, you are the monster hiding in the tall grass. Each game in the series requires you to level up your Pokémon to increase their powers, but Arceus is the first game that requires you to level up and increase your powers. They can call my progress metrics “Research Points” and “Ranks” all they want, but it’s all just exp and levels at the end of the day, and my monster man needs them all so that he can do whatever the human equivalent of learning Hyper Beam is.

Of course, this is all bubbling beneath the surface as part of the game’s rich subtext, the same as how the monstrous nature of man has always been bubbling beneath the surface of all culture throughout recorded history. No one is doing or saying outwardly monstrous things in this game, unless of course you count the silent consent towards the looming threat of the industrial revolution about to unfold in the game’s world. We all know that soon, the pastures where captured Pokémon roam free in clean air will be a thing of the past, replaced by telecom systems designed by Bill of Kanto to store millions of Pokémon in computer memory and to be able to send them across the planet in a microsecond.

Not long after that, the people of Johto will discover the delicacy of eating Slowpoke tails. And what about Grimer and Muk? Did you stop to consider that those Pokémon don’t even exist in the game’s world until humans generate enough pollution to give unnatural life to them? Bet you won’t find that in the game’s research journal!

Perhaps the most terrifying and legendary monster of all in the Pokémon universe is man itself.  It’s a bittersweet irony that this game presents to the player, from the first moments, that humanity is evolving. But all you can do is sit back and watch in horror, because holding down B won’t change a thing.