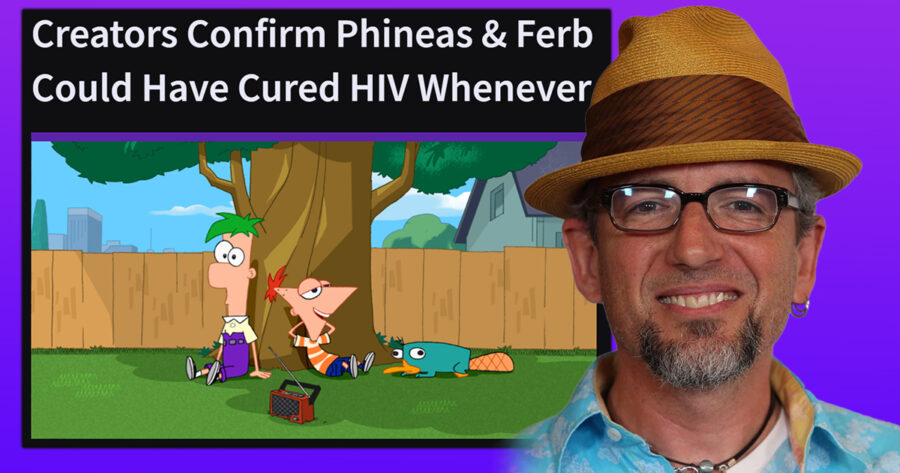 On January 15th, beloved* satirical nerd-culture outlet Hard Drive published an article titled Creators of Confirm Phineas & Ferb Could Have Cured HIV Whenever, including a fake quote from the show’s co-creator Jeff “Swampy” Marsh about trying to create an episode in which the titular scientist children stick it to Ronald Reagan, and everybody was cool with it.

Well we regret to inform you that Swampy has found the tweet and does not like the joke.

Monday afternoon, Swampy began hitting Hard Drive and its readers with some curt warnings that he had reported their tweet and that the article was fake. His fans deserved to know: he did not really believe that Phineas and Ferb could cure HIV whenever they wanted.

No. This is a fake and not a quote from me. This tweet has been reported

And perhaps fanning the flames, Hard Drive quote tweeted one of these accusations of falsehood with a simple 😮 emoji. And, well, once you’re in a ratio, it’s kind of hard to get out of it. Ratios are like quicksand in that way. The more you struggle and squirm, the deeper you find yourself in the sand.

“Lmao do you know what a joke is?” comments flew into Swampy from all angles, sticking in his mud like a, uh, stick.

“What do you mean? It clearly says right there that you did [say the quote in Hard Drive’s article]” read one tweet. “Yea I think it’s really irresponsible to question the journalistic integrity from the publishers of such hard hitting pieces such as the above article and this,” said another tweet, quoting an older Hard Drive article: Luigi Amiibo Curved to Hit G-Spot. 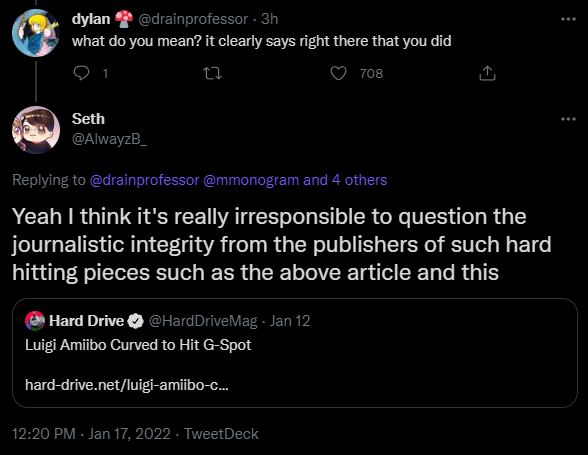 Swampy, jumping on an opportunity to misread a quote making fun of him while bringing up an article about sticking Luigi up his ass, thanked the commenter. 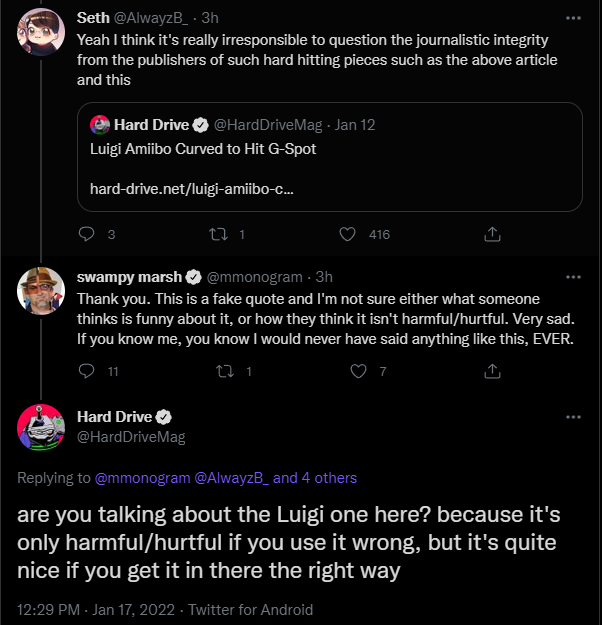 Trying his best to fight back against those who accused the creator of a children’s comedy show of understanding humor, Swampy explained his position. You see, children are confused. They’re messaging him begging him to explain why he would say such a thing.

I do. But I work in children's television, andmany of the people who follow me are quite young and If they don't read the entire article or are unfamiliar with this website, they are more likely to believe it is real. I have already been sent messages asking me if this is true.

We’re not exactly sure why Swampy is talking to so many children in his DMs, but we have a hard time believing that this is a real issue. Nonetheless, perhaps this is a good time to explain to these perhaps-imaginary children that sometimes there’s jokes on the internet and that they’re going to be OK.

Is this all Swampy’s fault? No, of course not. Swampy is probably just stressed out about fake news and all that comes with it. What if someone sees this and blames him for something he didn’t even do? Look, we get it. The internet isn’t a bongo circle, it’s a knife fight. It’s a scary place and sometimes you gotta get in there and stab your way out, reporting anyone who claims your co-creator Dan Povenmire said a fictional episode of your show where your characters permanently cure HIV is “basically the same as Rent, just with a platypus.”

But is it funny?

So get your dunks in while you can, I guess. Some say you can still find Swampy battling it out in the comments, liking ironically supportive tweets from fans referencing a Hard Drive article about Waluigi’s uncircumcised penis.

*You’re reading an offshoot of Hard Drive, please be nice.