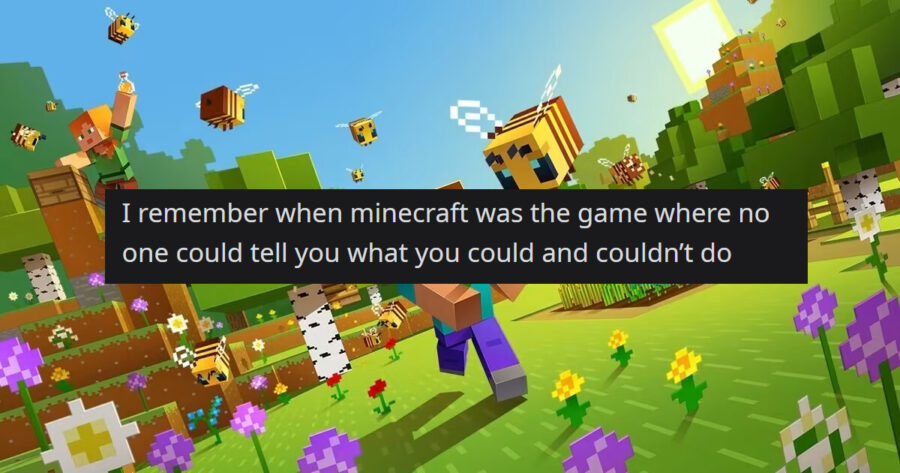 Microsoft dropped a new 1.19.1 update for Minecraft, which allows users to report each other in game for violating community standards. The rules that could result in a ban are pretty standard: no bullying, no hate speech, no doxxing, no soliciting sex in a game that is mostly played by children. You know, stuff that most well-adjusted people wouldn’t do anyways.

And then there’s Reddit, which is built differently. The Minecraft subreddit is currently in full “this is literally 1984” meltdown mode.

“I remember when minecraft was the game where no one could tell you what you could and couldn’t do,” posted one capitol-G Gamer about the video game where you play with building blocks.

Players’ main frustration seems to come from the fact that a ban won’t just remove users from public servers, they’ll get kicked from private servers as well. “How can this be legal? You can pay for the game, pay for the server, and then be denied access to it permanently? Is that not some kind of denial of service after payment is performed?” said one Redditor who I’d wager scrolls through any Terms of Service page they’re served and clicks accept without reading a word.

But why, you might ask through tears while clutching your Minecraft Steve body pillow, would they do this to us? According to various commenters, “Micro$oft” (sic) has a plot to ban good hard working crafters so that they are forced to buy new accounts. “Microsoft doesn’t care about children’s safety out of their own morals,” posits one poster, “they care about it because if they don’t they’ll lose sales, which means less super yachts per year for the executives.” Yes, if you don’t support crafters’ freedom to doxx children, you are the 1%.

Look, I’ll level with you. Some of these changes are going to result in frustration for private server owners, whether or not those servers have kids in them. It’s not clear how content moderation will work and if Microsoft will be able to separate real reports from trolls before handing out permabans. In theory, people should be able to just play a game with their friends on their own private servers.

However, the current reaction is Peak Gamer. Some are encouraging others to harass Microsoft employees and their support lines (a classic). Others are genuinely clueless (or feigning ignorance) about the fact that reports include context. “Imagine someone asking where spawn is and helping them by saying ‘just kill yourself and find out’. This might result in you not being able to access multiplayer for a while,” one user notes as a justification for letting users say “kill yourself” wholesale.

Despite Redditors painting the game as a libertarian utopia, Microsoft isn’t “sanitizing” the rude cold world of Minecraft. It’s making sure that you aren’t an asshole.