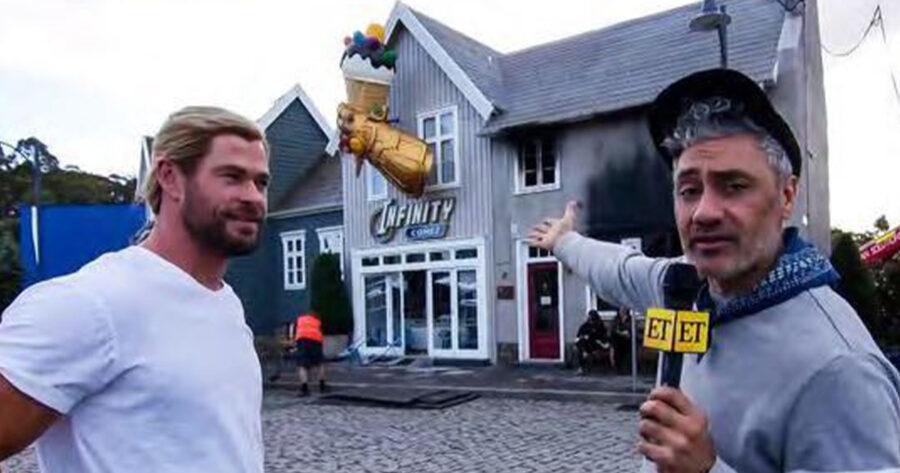 Thor: Love & Thunder, the latest MCU offering, is rife with the trappings we expect from both Marvel and Taika Waititi’s gradually declining trajectories. It’s got Whedonisms, CGI fights, and tired tropes throughout. But of all its faults, the most jarringly striking factor is its choice of ice cream shops.

In the first act, we’re reacquainted with New Asgard. A series of inserts and establishing shots familiarize the audience with how the town’s changed since the last time we were here. Housing developments, a town hall, a thriving stage performance scene, and the grand opening of “Infinity Cones” — an ice cream parlor themed around the single most significant cataclysmic, life altering event in the series. Its logo features the Infinity Gauntlet grasping an ice cream cone. You know, the gauntlet that wiped out half of existence in the universe for a while there and left every single human being on Earth grieving for the loved ones they presumed were dead.

I’m going to do my best to not tread on soy face, reactionary video essayist territory here. I get that it’s a one-off sight gag in a comedy. As eye-rolling as it is, it’s nothing to really kick up dust about (although, the unabashed Old Spice ad shown under the thin guise of a joke just seconds before is a different story altogether, and is frankly deserving of its own article). What it does warrant is a heavier scrutiny of the MCU’s constant back & forth with how it wants to treat “the snap” between films.

It always seems to be either an unspeakable disaster or a conversation piece. As a sprawling franchise spanning numerous directorial and narrative voices, it’s understood that not everyone will interpret things the same. One man’s tragedy is another’s edgy joke. That’s realistic. But for a business to be straight up based around the latter reaction? That’s the equivalent of “Mohammed Atta’s Eatery” or “Al-Queda Bagels” setting up shop in Manhattan. Considering too that these movies are ostensibly cranked out of a big ass Pink Floyd style meat grinder with those same creative voices being used as the pork floor scraps for the blockbuster hotdogs, a little uniformity is to be expected.

This is far from the first stark incongruity in regards to how the franchise treats “the snap.” In the mainline Avengers series, it’s game over. Total annihilation. Captain America goes to group therapy and grieves alongside Marvel’s first gay character. In the Jon Watts Spider-Man trilogy (and the greater MCU on the whole), it’s often a flagrant gag that seems to be relevant as a courtesy, for just long enough to stave off and satiate Redditors. While the emotional responses to tragedies like this take many forms, and are processed in countless ways, at the end of the day I think we can agree that the namesake of a dairy bar is not really one of them.

In regards to the contents of Love & Thunder itself, it’s less than the typical fair — which, funny enough, now seems to be the typical fair. A defined, calculable dip in quality is what we’ve come to not only anticipate, but eat up anyway. Sloppy stories, even sloppier characters. It’s nothing now for Marvel to take legacy actors like Christian Bale and Natalie Portman and cast them in completely disposable, flimsy roles.

We’re in Phase 4 now, folks. They don’t have to care anymore. You might get a bad order from McDonald’s once in a while, and sure, maybe you’ll complain to your friends about it. But will you never again in your life feel the impulse to scarf down a Big Mac next time you see the golden arches? Absolutely not. Hey, it should pair nicely with the delicious frozen confectionary treats that only Infinity Cones can muster. Act fast, they’re only gonna melt more and more by the day!