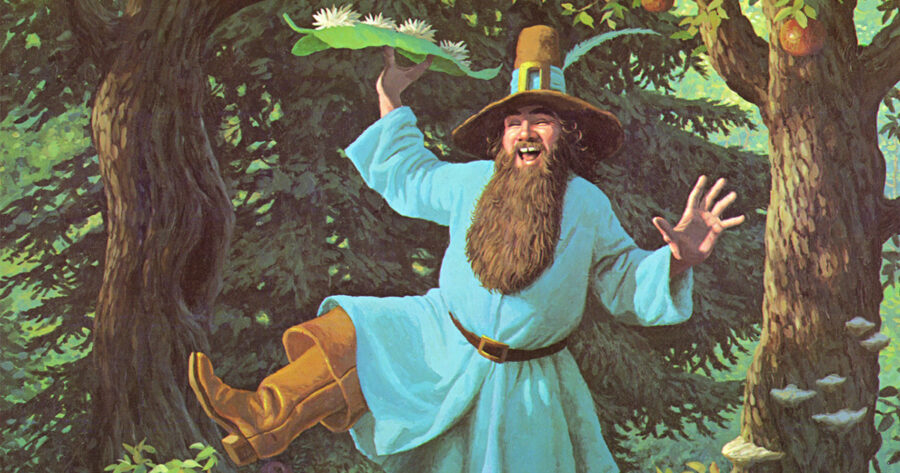 With Amazon’s The Lord of the Rings: The Rings of Power’s release date swiftly approaching, Tolkein fans are still treating the series with apprehension. Recreating a work with as much as mystique as The Silmarillion was always going to be met with disdain from purists from such a huge and entrenched fanbase, and incidents like the rumors of non-canonical nudity and Sauron looking like a whiter Eminem have only muddied the water further.

All of these complications could have been avoided had the series taken a different focus. What if it hadn’t been based on The Silmarillion at all? What if, instead, it was about the best character in all of Tolkein: Tom Bombadil.

Who Is Tom Bombadil?

Tom Bombadil is a roly-poly little fella who wanders out of the woods in Fellowship of the Ring to sing a bunch of songs about how he’s older than the world and has a hot wife. That’s his whole deal and it rules. He saves The Hobbits from a tree by talking to it, and eventually puts on The Ring, only to have it not affect him at all. Frodo asks Gandalf if they could give The Ring to Bombadil for safekeeping instead of destroying it, and Gandalf says Bombadil wouldn’t care enough about it to not lose it.

Thirty pages are devoted to him that don’t advance the plot at all and it’s the best thirty pages in the books.

What’s his deal? “Old Tom Bombadil is a merry fellow/ Bright blue his jacket is, and his boots are yellow.” That’s his deal. He’s a happy guy with a cool outfit, what else do you need? By the way, that song is how he immediately announces himself to the hobbits after they desperately ask for help to escape from a Barrow-Wight. Imagine if you called the fire department because you were trapped in a burning room, and a firefighter announced “I’m a swell fellow named Ted/ My coat is yellow and my helmet is red,” and then later told you he’s friends with God. It would be the best thing to ever happen to you, fire or not.

But Is There Enough Source Material to Carry a Show?

There is if you’re cool. There would be no plot to it whatsoever, Tom Bombadil doesn’t need a plot. He can easily sing enough songs about how the trees are his friend and the river is jealous of their relationship to fill eight hour-long episodes, and that’s all you need. Of course he’s going to repeat some of the songs to fill time. This is Tom Fucking Bombadil that’s what he does.

Incidentally, there is a book by J.R.R. Tolkein named The Adventures of Tom Bombadil, a collection of 16 poems of which only two feature its namesake character. There could be even more mineable Bombadil content in those two poems, but I wouldn’t know because I haven’t read the book and no one else has either. Incidentally I also haven’t read The Silmarillion, like a true Tolkein fan I have been meaning to for years but haven’t because I am easily intimidated, so honestly he could be mentioned and I’d have no idea. If anyone lies to me and says Bombadil is in The Silmarillion, I will never make an effort to fact-check it because they will have made my world just a little bit sweeter.

Why are you so obsessed with source material, anyway? Wouldn’t it be nice to tackle something that doesn’t feel immediately wrong if they make it different from the books? There’s nothing precious about Bombadil — he’s a jolly little weirdo who can be whatever we want him to be. In the right hands, that would be pretty freeing, I think.

What About a Cameo in The Rings of Power?

If Amazon is too scared to listen to the real fans (me and only me), at least give my man a cameo. He is the oldest living creature in Middle Earth, so it makes sense that he would be alive in the events portrayed. Like all cameos, Tom Bombadil’s would add nothing plot-wise and ruin the pacing, but this time it would be good because that’s the point. He shows up in Fellowship for no other reason than to have a good time, which most cameos are meant to do but instead make you think about how much better the original media was. Bombadil, however, would make you think “god I love Tom Bombadil”.

Peter Jackson cut Bombadil from the LOTR movies entirely because he grinds the story to a dead halt and forces it to listen to him sing songs about himself. That was a mistake, and Amazon should rectify this by leaning in; at the final episode. Right when the plot is at its juiciest and moving quickest, old Tommy should show up and force everyone to stop what they’re doing and listen to him talk about his wife for a solid fifteen minutes. He should wreck the pacing of the show because that’s what he does and it’s awesome.

Why Do You Need a Reason for Tom Bombadil?

There shouldn’t be any real reason for Tom Bombadil to show up, either in a cameo or his own series, because there was never a reason for him to show up in the original book. He just shows up, hangs out, and hijacks the story, and it’s the best goddamn part of the book. I’d argue it’s even antithetical to the character to give him a reason to pop up in a cameo or a fully-fleshed and thought-out arc in his own series; Tolkein didn’t need a coherent reason to put him in Fellowship, he’s just there. There is no justification for why he’s there, he just is because Tolkein felt like it.

If you have to ask yourself, “why do we need Tom Bombadil?”, follow that up with “why does the sky need birds?” It doesn’t. The birds mean nothing to the sky, but their presence in the face of an uncaring space doesn’t dampen either of their beauties. Instead they both shine brighter. Tom Bombadil should show up somewhere, anywhere, because he’s a rolly-polly little fella who likes to sing songs about his hot wife.