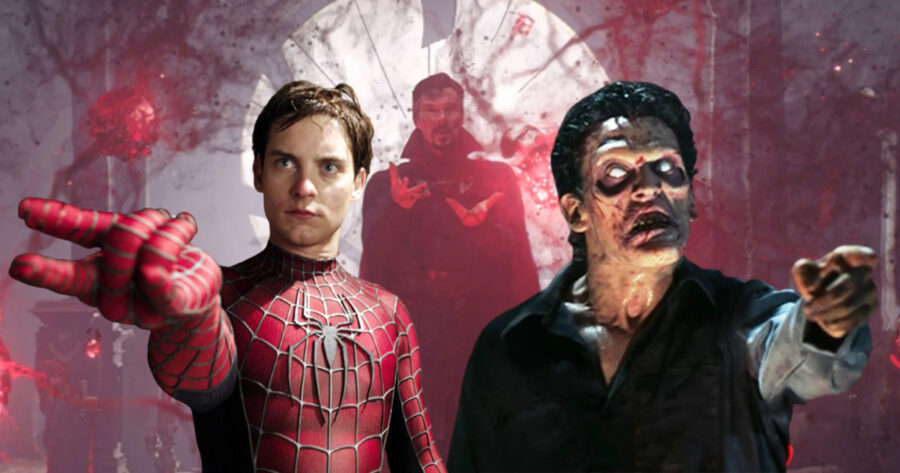 Sam Raimi, the director behind the Evil Dead franchise, the original Spider-Man trilogy, and a whole bunch of other wacky film adventures hasn’t made a movie in almost a decade. Hell, he hasn’t made a movie in 13 years if you close your eyes, stick your fingers in your ears, and pretend that Oz the Great and the Powerful doesn’t exist. So for the sake of anyone who doesn’t remember Sam’s greatest hits, let’s quickly run through some of the features that make up a Sam Raimi movie and whether or not they appear in Raimi’s newest film, Doctor Strange in the Multiverse of Madness:

An Undead Mirror Version of the Hero? Check

At this point, we can all agree: If you’ve seen another Sam Raimi movie, you have basically seen Doctor Strange in the Multiverse of Madness. Sam is using every little trick he’s ever pulled in every one of his movies and TV shows, with the biggest budget he’s probably going to get, ever. This isn’t even his first movie about an Arrogant Doctor Turned Superhero.

The story opens with a gruesome death in classic Raimi style: a demon rips Dr. Strange’s face open. Of course, it’s not our Dr. Strange — he’s from ANOTHER DIMENSION, and his companion, America Chavez, is hurled into a portal that takes her to a new, strange place.

The all-important New York Fight Scene where Gothic Architecture is smashed to rubble tells us, okay — we love Spider-Man. We are going to get the big soaring hero fights. But that’s one section of the Raimi Catalog. It’s the moment when he rips the Cycloptopus’ eyeball out that announces “Raimi’s back on all counts, baby!”

As we settle in after the opening numbers Raimi hits us again: who’s the big bad villain chasing down America Chavez? Why, it’s a woman driven to evil deeds by the loss of her family. And how does she plan to get that family back? With the help of an evil book that corrupts and destroys anyone who reads it, of course!

The Scarlet Witch then comes to Kamar-Taj for an epic fantasy battle with plenty of casualties. To escape her, Dr. Strange & America Chavez leap into the multiverse, landing in a dimension where Bruce Campbell beats the shit out of himself with his own possessed-hand. They eventually meet the Illuminati, a bunch of Marvel heroes who all hole up in one building together, completely unaware that they’re each about to meet their gruesome deaths in a style that can only be described as “SAW meets Wile E. Coyote”

Raimi’s just getting warmed up and he gives us even more hits, one after the other: an absolutely bonkerballs musical number that involves our hero almost losing himself to the darkness in his own heart. Then he resurrects his aforementioned undead doppelganger, and harnesses the power of a bunch of slapstick skeletons to make the villain see the error of her ways and stop the universe from imploding. Finally, armageddon is averted, and he can return home. Of course, returning to his normal life doesn’t mean the weird shit stops happening, but now — he’s prepared for it.

Hell, Wanda even gets a chance to do the classic Evil Dead first-person camera move as she stalks and possesses an alternate-version of herself in her own home, not to mention a through-the-tunnels horror sequence that feels like the first time the MCU has let a director briefly try a genre out other than “quippy comedy.”

Even still, with Doctor Strange 2: Dimension Boogaloo, Raimi gives us the whole spectrum of his catalog: action, humor, and triumph; but also nausea, terror, and titillation. He gives us exactly what we want, waits for us to go “Oh shit! He did the thing!” then he’s on to the next one, and the next one. Finally, for an encore, he comes back, replays his biggest crowd-pleaser, and audiences eat it up!

So we say: Play It Again, Sam!