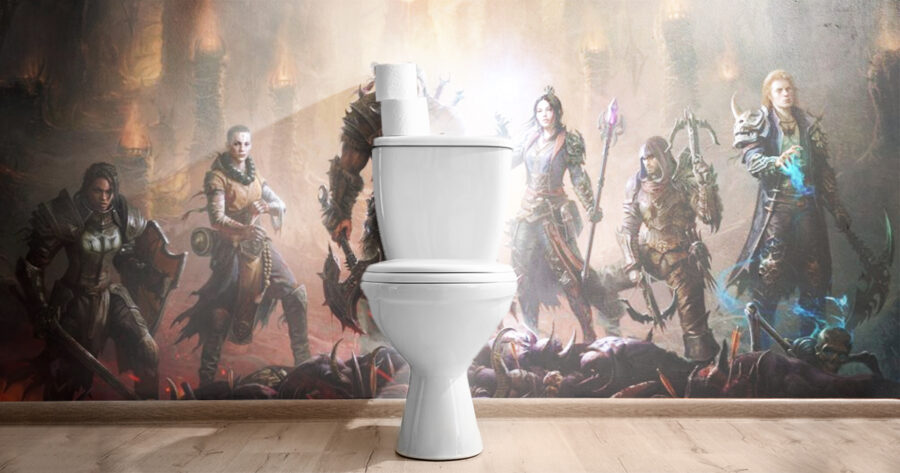 Like seemingly every single other person on the planet at this point, I have IBS, or Irritable Bowel Syndrome. What that means in real terms is that I spend a good amount of time using the toilet against my will. That time is usually spent battling my foot falling asleep while browsing Twitter, sifting through Discord channels, and watching every TikTok the app will infinitely feed me.

Although I’ve tried many mobile titles in the past to pass the time, nothing has specifically clicked for me beyond just a few play sessions — until now. On June 1, Blizzard Entertainment launched their new mobile game, Diablo Immortal, early to devices across the globe.

The game caught a metric ton of backlash when announced back in 2018, facing a whirlwind of hate from both the American gaming market which is still extremely skeptical of free-to-play mobile games and longtime fans of the franchise who wanted nothing less than a Diablo 4 announcement. Remember the “do you guys not have phones” fiasco? That was Diablo Immortal. Tack on that pesky Blizzard workplace scandal that has plagued the company for over a year now and it’s safe to say people weren’t exactly keen on this release.

Despite this skepticism, after spending time with Immortal, I can safely say that it is solid and successfully brings Diablo right to your phone. But, more importantly, it is a very good game to pass the time while your ass is firmly plopped on white plastic.

Immortal is essentially just Diablo 3 on your phone. The classes are exactly the same and all the spells feel just like the ones you’d find in D3. The game doesn’t really care about reinventing the Diablo wheel, and that’s why it works. It flourishes purely as a regurgitation of its predecessor, adding on some microtransactions that you’ll have to X out of.

Diablo’s character movement was never super complicated, so adapting its controls to phones works seamlessly. Immortal also has some nice details that make it feel classier than other mobile titles. The voice acting is classic Diablo, and Deckard Cain is still there as perfect and frail as ever. At the end of the day, Blizzard’s new mobile game works perfectly for passing the time while cleaning out your colon.

Immortal has mainly served for me as a great distraction from doom-scrolling while using the bathroom, and that alone could make it a Game of the Year contender in my book. The ARPG has successfully deterred me from countless pointless and stupid Twitter threads that would only serve to take hours off my life. This game does what all mobile games should aspire to do: successfully pull the user away from glancing at Twitter for the 47th time, and Diablo’s dumbed-down combat is just engaging enough to do so.

Although, beyond general toilet use, the game will mostly seep from your memory. If you actually had a hankering for Diablo, I say that Diablo 2: Resurrected and Diablo 3 are still better options for anyone sitting in a real chair. I have still yet to open this game outside of a bathroom, and I’m not sure that I will. But, I know that when I do inevitably have to use the toilet once again, Deckard Cain and my Wizard named ‘Soapy’ will be there by my side to battle both ancient demons and ass-demons alike.