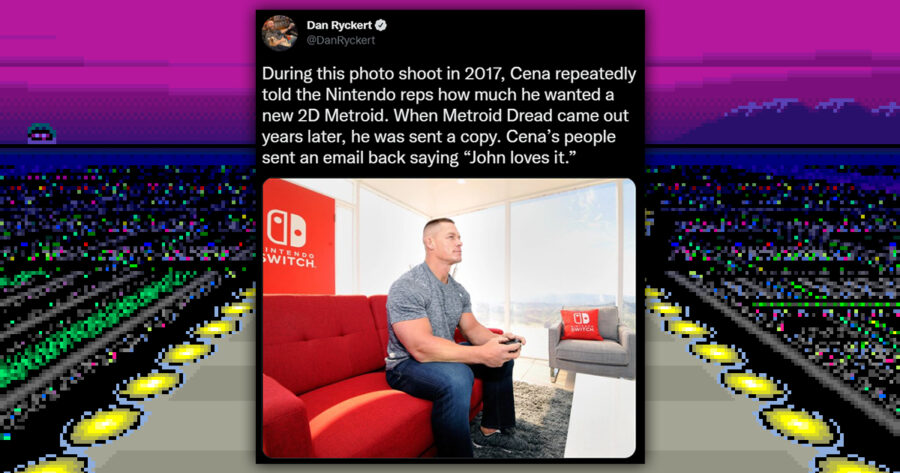 For decades, Nintendo fans have used their voices to try and get a slew of beloved IP revived. It’s been a futile effort, mostly falling on Nintendo’s deaf ears. But it turns out there’s been a secret to getting Nintendo to listen to its fanbase all along…someone who has been invisible to us all this time…and his name is John Cena.

On Sunday, Giant Bomb Creative Director Dan Ryckert took to Twitter to share an anecdote about Big Match John, accompanied by a now iconic photo of Cena playing Switch. “During this photo shoot in 2017, Cena repeatedly told the Nintendo reps how much he wanted a new 2D Metroid,” Ryckert tweets. “When Metroid Dread came out years later, he was sent a copy. Cena’s people sent an email back saying ‘John loves it.’”

During this photo shoot in 2017, Cena repeatedly told the Nintendo reps how much he wanted a new 2D Metroid. When Metroid Dread came out years later, he was sent a copy. Cena’s people sent an email back saying “John loves it.” pic.twitter.com/Rjg3uh6ynv

The off-hand story is a monumental moment for Nintendo fans. While commoners have no influence over the company, John Cena is no man. He’s a 16-time WWE World Champion, one who could absolutely flatten Doug Bowser with an avalanche Attitude Adjustment from the top rope. It makes perfect sense that Nintendo would have rushed to avoid getting hit by the five moves of doom by making Metroid Dread following his request (if you ruin this fantasy by pointing out how the success of Metroid: Samus Returns mostly contributed to the series’ return, I’ve got as five knuckle shuffle with your name on it).

In moments like this, we need direct action. So we’re calling on you, Minus World readers, to make your voice heard. How? By telling John Cena that he should ask Nintendo for a new F-Zero next.

It’s been nearly 20 years since the last F-Zero game was released. Nintendo’s fast-paced, futuristic racing series seems to have been scrapped so Mario could monopolize the Nintendo racing game scene. The idea of getting a new game has long been more hopeless than the prospect of getting a Mother 3 port (and that’s saying something), but the Doctor of Thuganomics might be able to change that. Who better to bring a game back from the brink of death than the superstar who’s famous for getting his ass beat for 20-minutes and then miraculously making a comeback with a pair of flying shoulder blocks?

As far as I’m concerned, John Cena is now our own personal video game ambassador. Just as you should write to your senator to demand action on social issues, we should all ask Cena to flex his executive muscle to bring back F-Zero. Perhaps he can be swayed if we suggest that he could play Captain Falcon in a movie adaptation. Maybe Nintendo could even cast Brock Lesnar as Samurai Goroh and let Cena finally get revenge for his Summerslam 2014 squash loss.

However you go about reaching out to Cena, whether it be by a friendly tweet or Instagram comment, this is the best chance we have. No longer can Nintendo pretend they can’t see us. They won’t silence our voices by locking us in the STF. They’ll never catch us in the next man’s sweater.

The time is now, John.